Today is the eve of a new year and a new decade, and for The Bahamas it is a day on the cusp of a critical period for the country.

Externally, presidential elections in the United States and ongoing instability in Haiti will be key variables on the economic, geopolitical and migration front as the increasingly deleterious effects of climate change loom large over the country’s efforts to rebuild from the ravages of Hurricane Dorian.

The International Monetary Fund (IMF) continues to project sluggish economic growth for 2020, and with the Central Bank projecting economic gains constrained to the hotel sector for the new year, managing the country’s recovery will require careful planning and a creative balance between fiscal prudence and economic incentivization.

Globally, top analysts predict that economic and political tensions will pose the most significant risks to business and fiscal objectives in 2020.

With so much having taken place this year, not the least of which being Dorian’s destructive impact, it can be easy to forget that in a single year the nation’s governing party saw four resignations — one from Cabinet, two House members from its parliamentary caucus and one from the Senate.

Both the Cabinet and Senate resignations took place amidst swirling public and political controversy and the Free National Movement’s (FNM) former members of Parliament resigned from their party citing incongruence with their personal values and ideological positions.

We understand that several first-time Cabinet ministers, perhaps unfamiliar with the Parliamentary Pensions Act, began seeking to determine what their pension entitlements would be only two years in — an indication that confidence within the confines of the Cabinet bunker might be shaky at best for some even as public utterances by ministers make it apparent that the group is often not on the same page.

To be sure, all governments have their share of internal wrangling and this would be par for the course were it not for the fact that the FNM is a less disciplined political organization than its opponent the Progressive Liberal Party (PLP).

When coupled with the fact that a good number in the government are new both to frontline politics and their organization, their political moorings and arguably their loyalties thereto are a less than safe wager to some observers.

Together with public discontent and the strain thereof that can push even seasoned politicians to make policy, fiscal and political decisions motivated by self-preservation over sound principles of governance, 2020 will be a year to watch on whether the government can hold itself and its management of the affairs of state together in a way that bodes well for the country.

On the social front, homelessness and joblessness created by Dorian compounded by pre-existing levels will be one of the government’s most pressing challenges and the society’s more notable pressures.

State Minister for Disaster Preparedness Iram Lewis recently told this newspaper that the $10 million announced by government to be apportioned to storm victims for home repairs had not yet been released by the foreshadowed Reconstruction Trust Fund because the system for disbursements had yet to be properly organized.

It is not known what it will take to get this system properly organized and there has been little demonstration to date that the internal capacity exists to do so, but large-scale homelessness such as exists on Abaco and Grand Bahama and for evacuees is a threat not only to the children and adults impacted, but to the wider society and the economy.

How the government manages the ongoing impact of this crisis will represent a critical marker in 2020 for the future of both islands and the thousands of Bahamians who call them home.

Above all, what 2020 must bring is a more sober, steady and collaborative mode of leadership than has existed thus far this term, so that Bahamians can be made to know the precise plan and path to national recovery and progress, and how they factor into the same.

If the government is to chart meaningful successes in a dampened economic environment in the new year it must work to increase the current level of government efficacy because without public buy-in, the task of governance will be daunting at best and could fall short of meeting the nation’s needs.

Living up to core pledges in 2020 would be a good start.

The Nassau Guardian’s Team of the Year 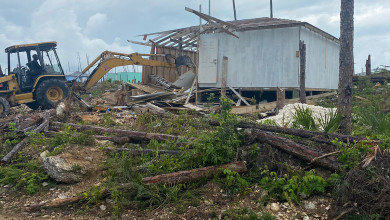 The loss of decorum in the House

Misuse of the deputy speaker’s authority