As near daily reports of armed robberies persist on New Providence, Minister of National Security Marvin Dames yesterday warned Bahamians to be on their guard, be smart and take precautions.

Since October, nearly every day on New Providence, at least one person was the victim of an armed robbery.

Between September 1 and November 20 there were 64 armed robberies on New Providence, according to numbers provided by the Royal Bahamas Police Force.

“Like anywhere else, you have to be smart,” Dames said outside Government House.

“…Many times when I’m traveling home at night, we tell people be careful going into secluded places. You know, you drive around at night and then you see cars on beaches in bushes. You know, that isn’t prudent decision making.

“When you’re coming home at night, notify someone. Notify the community.

“We have in many of these communities now very active neighborhood watch groups that are very vibrant.

“In my constituency alone, we have three very vibrant neighborhood watch groups and they have been doing a tremendous job in ensuring that their residents are safe. They have communication equipment. They can communicate with one another. They use vehicles to safeguard their communities.

“Is this a panacea? No, it’s not, but it has gone a very long way in reducing the amount of crimes in those communities.

“At night time, if you don’t have to be sitting in your car talking to someone at night with no light around, don’t. Take the person inside or go to some public place. Have a soft drink and have a conversation.”

He added, “These are the times that we are living in.

“It’s no different anywhere the world over.”

Dames said this is simply “the time of year that we’re in”.

But he said police are making inroads.

He said some people are simply determined to commit crime.

In particular, he lamented the commonality of people out on bail being responsible for new crimes.

However, he assured the Bahamian public that police are doing a good job and will continue to make the island safer.

He said Commissioner of Police Anthony Ferguson has implemented a holiday strategy to increase security given the increased likelihood of crime during the season.

“The sad thing is that there are individuals out there, many of whom are out on bail, who will take that chance, take that opportunity to try to make a few bucks,” he said.

“They don’t want to work. And their job is only to be a menace to society. The commissioner and his team are aggressively pursuing those individuals.

“They have now implemented their holiday strategy and that’s superimposed on the ongoing strategy that they currently have to shore up our communities during the holiday seasons to protect our business people, to protect our residents as they are returning home.

“So, you will continue to see more and more police resources on the streets. They will begin to move that shift from the various stations onto the streets just to get into the holiday season, and to ensure that people can go about their business without having to be concerned about someone sticking a gun to their face.”

On Wednesday, police said there were three armed robberies and one attempted armed robbery.

Police said they took a man into custody in connection with one of the incidents.

In the first incident, police said a woman was on Wild Guava Street in Pinewood Gardens around 6 a.m. when she was hit by a man driving a car and robbed of a bag containing cash. A police officer who witnessed the incident chased after the vehicle and arrested a 26-year-old man.

In the second incident, a man who arrived at a home on Jerome Avenue was approached by two men who robbed him of a bag of cash.

In the third incident, a woman was sitting in her car at a service station on Alexandria Boulevard in Nassau Village just after 9 p.m. when she was approached by a man with a gun who robbed her of her Nissan Note.

Shortly before, on the same street in Nassau Village, a man with a gun attempted to rob a man of his vehicle. According to reports, the victim was sitting in his car in the parking lot of a grocery store when the gunman entered his vehicle and told him to get out. The victim ran out of the vehicle with his keys as the man shot at him, injuring his arm. Nothing was taken.

‘These are the times we are living in’ 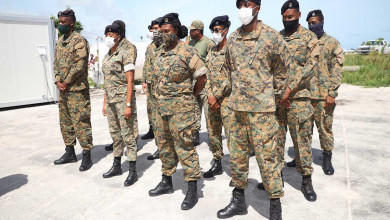 19 people arrested for violating curfew on Abaco in recent days