Of the 72 children that enrolled in the Bain and Grants Town Community Virtual School Graycliff Campus, there was one third grade-aged student officials found reluctant to utilize the Ministry of Education’s virtual learning platform, even though he had access to a device, WiFi and electricity at home. After three weeks of working with the student, campus officials finally realized, based on the analysis by retired trained teacher, Dr. Ivy Campbell, that the student had a reading deficiency. They proceeded to work with him during school hours as well as after school let out for the day to improve his proficiency.

When the school let out for Christmas break, Graycliff campus dean Felicia Carey said the student, when he started, based on what they saw, had a grade point average (GPA) below 2.00 and who, according to his parents, has shown improvement to 2.34.

“We understood students may not have been in school for a while, so it took time for him to be adjusted to reading and learning, and he was able to bring up his GPA,” said Carey.

“And it wasn’t just that kid – I believe we reached all of the kids not only academically, but also by giving them emotional support and spiritual support. Due to the lockdown measures and the added stress, not only from being locked down, but the stress the children’s parents and caregivers experienced, my team and I did an amazing job with making the kids feel not only welcomed, but helping them to understand what’s really going on. In turn, the kids were able to express themselves in relation to the stressors COVID-19 brought upon them.”

For the most part, Carey said the students that attended the campus, on rotation, was a mix of honor roll and non-honor roll students, and that many of them did not have access to the necessary equipment to continue their education on the MOE virtual platform.

Carey said communication with parents was also important in the process.

The children attended classes weekdays in rotation in the Humidor Churrascaria at Graycliff, which had been refashioned into a physically distanced classroom setting that sat two students per table, separated by plexiglass.

The school went live on October 5 and ran through the Christmas break – a 12-week period.

The Garzaroli family (Enrico and Anna Maria, Roberta and Paolo) owners of Graycliff, partnered with Bain and Grants Town Member of Parliament Travis Robinson in the initiative.

“The entire experience was a learning one for the entire Graycliff team,” said Roberta Garzaroli, Graycliff public relations director. “We were grateful that we could offer the kids a place to learn and a hot meal each day. Our hearts were thoroughly touched on the final day when we received a beautiful thank-you card. It was the best Christmas gift ever and it is framed and displayed in the lobby at Graycliff hotel and restaurant for everyone to see,” she said.

Garzaroli, in an earlier interview, told The Nassau Guardian that her family was happy to make use of a space that they were not currently utilizing during the pandemic and lockdowns as a center of learning for the children.

The students afforded the opportunity to attend school on the Graycliff campus were selected based on the fact that they may have had challenges with electronic devices and WiFi at home.

Four teachers supervised and assisted the students in the learning-conducive environment that was created. Lunch was also provided by Graycliff Hotel & Restaurant for the children.

After school broke for the Christmas break, the students did not return to the Graycliff campus due to the challenges of school schedules, according to Carey.

But she added that the campus served its purpose in the 12 weeks they operated.

“I believe that the Graycliff campus was not only an educational environment, but one the kids used as a sanctuary, because the surroundings are tranquil and serene and social distancing protocols were adhered to.”

One of the perks the children had looked forward to was the idea of swimming lessons in one of the property’s two pools, but Carey said those lessons never got started. While swimming never materialized, she said the children were able to take advantage of other opportunities, which included pizza making at Graycliff’s pizzeria, touring the property’s museum and learning about the historic property. Representatives from Baark! (Bahamas Alliance for Animal Rights and Kindness) also visited the campus to speak to the children about animal safety.

“I really miss the kids, and I really miss being able to bring some type of support to them because I understand that kids don’t really say what they’re feeling, especially with the stressors of COVID. I miss listening to the kids talk about their goals, aspirations and dreams. Two of them worked along with their fathers as fishermen, and we let them express themselves freely. Through the pandemic, they were still able to have some joy while at the campus. It was like a home away from home for them.”

While Carey said she knows it remains tough for parents at this time with the ongoing pandemic and its challenges, she encourages parents to take the time to listen to their children and what they are feeling.

“Let them express themselves freely and try to find the joy in spending time with your kids doing family-oriented stuff. It really brings a balance,” said Carey.

On their final day on campus, not even realizing they would not be returning to the campus, the children created a beautiful Junkanoo card for the Garzaroli family to thank them for hosting them at the campus, and for Robinson for taking the time to understand the needs of the community and the children who did not have WiFi, devices and electricity at home. 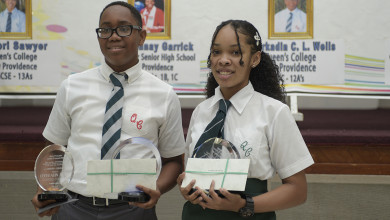 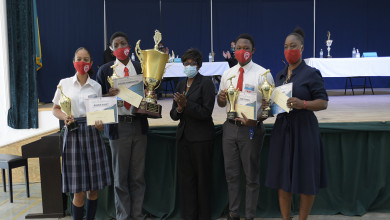 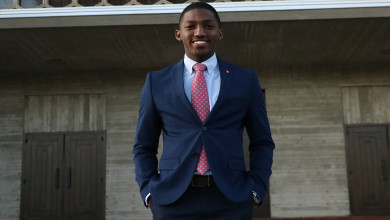 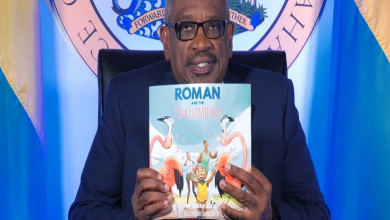