“I will lift up mine eyes unto the hills from whence cometh my help; my help cometh from the Lord, which made heaven and earth.” – Psalms 121:1-2

“Before the hills in order stood, or earth received her frame, from everlasting thou art God, to endless years the same.” Like the traffic sign that causes one to merge, our text for today not only brought this second verse of Sir Isaac Watts’ well-known hymn, “O God our help in ages past”, to my thoughts, but the prophetic bold headline of the recent Nassau Guardian article, “Cat 5 would swallow most of New Providence”! And why should I be so bold as to call it prophetic, when media polarization is as rife as can be?

I wrote before that I began this column, Along Life’s Road, in November of 1997, and many of you dear readers would recall on many occasions, I voiced my concerns with the flattening of our hills in the nation, especially the one on East Street south.

My family moved from Hay Street to 210 East Street on December 19, 1959, so I can still recall the grinding noise of heavy Cat tractors and witnessing the demolishing of that very high hill; and way back then, I would always feel doom and liken it to the opening of the flood gates, because the waters at South Beach always withdraw miles away from the shore. Wow! I would say, “East Street is the I-95 or the corridor to Prince George Dock.”

There is something special and grandeur about hills and mountains, insomuch that poets and artists have captured scenic paintings and prose of the same!

Now, we have the experts who have given us the whole nine yards to climatic change and its consequences of not how but when? But we have removed the “hill” for “fill”; the power of greed!

My late brother, Richard, apart from being a lawyer, was a serious artist and one of his paintings in three parts, was the Exuma Cays abstracted as footprints across the vast ocean. These islands of The Bahamas are no more than sand banks and as such, the “great architect”, God, caused ridges to be strategically placed as barriers to ferocious waves when needed. If we look here on New Providence, every hill that was a barrier for our protection has been torn down; Collins Hill recently extended, Hawkins Hill, Sears Road for our northern protection, and from the south, drive from the airport and follow the ridge. The hymn writer said that they were orderly put in the earth. They were not “slam, bam”! Thought and sincere intent was a part of creation.

O hear us when we cry to thee, for those in peril on the sea!

The psalmist David, in his daily rising, and facing the many hills surrounding Jerusalem, would look for protection and provision from Jehovah God, knowing that all he needs comes from Him, the Lord, not the law. How many are trusting in horses and chariots that suffer from collapse and broken wheels? How many fingers are numb from pressing the “panic button”? How many are suicidal because they refused to believe in the God of Abraham, Isaac and Jacob? How many families are destroyed because they refused to “look and live”?

I encourage each and every one to begin to put all your trust in God and watch great changes in your wealth as well as your health, your social being and your spiritual growth. How many remember this childlike prayer – “When I look up to yonder sky, so pure, so bright, so very high; I think of one I cannot see, but one who sees and cares for me. ‘Tis He my daily food provide and all that I can want beside; and when I close my sleeping eye, I rest in peace for He is nigh”? Thank you, father God!

We who are in Christ are called to be good watchmen 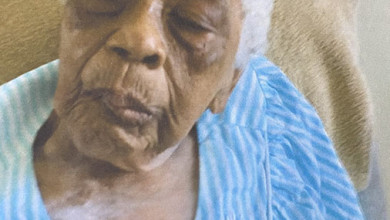