The body of a man, who is believed to be middle aged, was discovered near a soccer field on Celery Drive off Baillou Hill Road yesterday, police said.

When officers arrived they found the man lying in the fetal position. Peters said a belt was next to him.

The man had no visible injuries and police do not suspect foul play, Peters said, but noted that police classified the matter as a suspicious death.

Police will await the results from an autopsy report to determine the cause of death.

The victim, a dark man with a full beard, was wearing dark clothes and may have been in the area for 24 to 48 hours, he said.

“We are appealing to members of the public who may have a relative that’s not been seen for some time to contact the police,” Peters said.

Peters also said that there was no update at this time, when asked, on the murder investigation of six men killed on Jerome Avenue last month.

“What we want to say to the families of the victims is that the officers are doing everything that they can to bring the right person to justice and not to speculate or insinuate or cast any aspersions on anyone,” Peters said when pressed on the investigation.

“At the end of the day what we are looking for is justice – the right person being held responsible for the crimes that are being committed.

“In most instances it takes us time to get the right person and the evidence that is admissible in court. We are not here to please and quail public furor, but to get the facts.”

Peters again called for anyone with information on the murders to contact police.

“We live in a small community, somebody knows something,” he said.

Commissioner of Police Paul Rolle recently said that he believes police will solve the matter.

Last month, six men, who were recently released from police custody, were killed at the intersection of Jerome Avenue and Chesapeake Road.

A 19-year-old woman and a two-year-old girl were also shot during the incident, but they survived.

Police said the men were traveling on Jerome Avenue in a Honda Inspire when four men, dressed in black, exited a white Kia Sportage and opened fire on them.

Once the shooting started, the Honda ran off the road into bushes, according to police.

Afterwards, the suspects continued firing their weapons on the inside of that vehicle, police said.

The Kia Sportage was later recovered on nearby Edward Avenue. 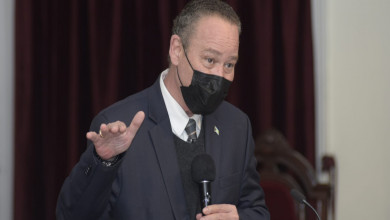