It is the second week of Ordinary Time in the Catholic Church, but by no means is it ordinary times for Bahamians and the world at large, according to Roman Catholic Archbishop Patrick Pinder, who celebrated mass yesterday with the people of Abaco and Grand Bahama uppermost in his mind, as the first anniversary of the devastating Hurricane Dorian was marked, and as people try to find a new normal in the COVID-19 pandemic.

“As the people on those islands continue to rebuild their lives and their communities, we hold them in our prayers as they rebuild following the devastation and destruction of Hurricane Dorian, [as] just yesterday, we marked the first anniversary of the passage of Hurricane Dorian across the northwest Bahamas,” said Pinder during the livestreamed service.

He said the work of rebuilding Abaco and Grand Bahama will continue for years, and as the people on the islands rebuild, the archbishop urges people to encourage and share in their efforts in whatever ways they can.

The Catholic archbishop noted that the building of St. Francis de Sales Church in Marsh Harbour, Abaco, which sheltered over 300 people during Hurricane Dorian, and where many lived for weeks after the hurricane, is almost completely restored. Built on a hill, he said, the church suffered no water damage from the storm surge, which was a great help.

The school – St. Francis de Sales School, which is built on lower ground – suffered both wind and water damage. Pinder said rebuilding at the school is advanced, and the plan is to restart school on schedule later this month.

The church at Treasure Cay, Sts. Mary & Andrew, was completely destroyed in the hurricane. He said it will have to be completely rebuilt. The design for the new church, he said, is complete, but the building process has not yet begun.

On Grand Bahama, he said, the church’s efforts are focused essentially on assisting with rebuilding and repairing damaged homes. And that Catholic Relief Services has established a center on Grand Bahama, through which all of the efforts to assist are co-ordinated – covering a range of areas from home repairs to counseling.

The one-year anniversary of the passage of the devastating storm coincided with the 27th annual World Day of Prayer (WDP), a global ecumenical movement led by Christian women who welcome everyone to join in prayer and action for peace and justice.

This year, WDP focused on the care of creation.

“We observed the World Day of Prayer for the care of creation. The church is acknowledging the impact of human activity on what we call climate change. And we’re being challenged to be better stewards of creation, which is our common home,” said Pinder.

Pope Francis, in a written message on Tuesday, said, “In some ways, the current pandemic has led us to rediscover simpler and sustainable lifestyles.”

He urged people to seize the opportunity to reflect on their habits of energy usage, consumption, transportation and diet.

“Already, we can see how the earth can recover if we allow it to rest: the air becomes cleaner, the waters clearer and animals have returned to many places from where they had previously disappeared.”

Francis said constant demand for growth and an endless cycle of production and consumption are exhausting the natural world.

“Creation is groaning,” said the pope.

Pinder said Pope Francis speaks to the care of the common home and about the ethical and spiritual roots of the world’s environmental problems, which requires mankind to look for solution, not only in technology, but in a change of humanity. Otherwise, he said, people would be dealing merely with symptoms.

“We are asked to replace consumption with sacrifice; greed with generosity; wastefulness with a spirit of sharing; and aestheticism, which entails learning to give and not simply to give up. It is a way of loving, of moving gradually away from what I want, to what God’s world needs. It is a liberation from fear and greed and compulsion,” said the archbishop.

He spoke to a positive trend locally, where he has seen many people setting up their own vegetable gardens, which he said he encourages. For those still considering doing a vegetable garden, he reminded them that this is the perfect time to begin to prepare their garden space, so they can begin to plant as the cooler months arrive.

“I encourage you to plant a vegetable garden this year,” said Pinder.

The Catholic archbishop also urged people to be vigilant

“Let us prepare and then say a prayer and know that despite it all, in the end, all shall be well.”

In his sermon, the archbishop prayed for the people of Abaco and Grand Bahama as they continue to rebuild; Pope Francis, that he continues to guide his people after Christ, the Good Shepherd; protection during this hurricane season; and for all those who are sick, and particularly those infected with COVID-19, that they be restored to full health.

Christianity is how we live 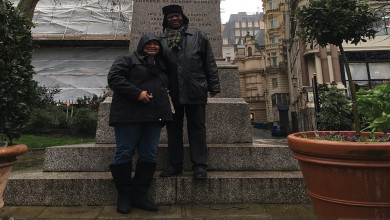