As is often the case with eating candy, you can either end up wanting more, or be left wanting.

The new film “Candyman” manages to accomplish both; I was certainly expecting a whole lot of something else, as what I got left me feeling like I didn’t quite get what I had hoped for.

There’d been so much hype for this new version, with even more anticipation after a number of pandemic-related delays. With Oscar-winner Jordan Peele (for original screenplay for 2017’s “Get Out”) as one of its producers, and also a co-writer (along with Win Rosenfeld and the film’s Director Nia DaCosta), many were expecting some of that same “Get Out” and “Us” magic.

While not quite a remake, this is technically a sequel to the original 1992 film of the same name.

In present day, a decade after the last of the towers in the low cost public housing community of Cabrini-Green in Chicago were torn down, Anthony (Yahya Abdul-Mateen II) and his girlfriend Brianna (Teyonah Parris) move into a loft in the now gentrified Cabrini. A chance encounter with an old-timer (Colman Domingo) exposes Anthony to the true story behind Candyman. Anxious to use these macabre details in his studio as fresh grist for paintings, he unknowingly opens a door to a complex past that unravels his own sanity and unleashes a terrifying wave of violence.

Much like the original, this 2021 version taps into lots of myths and urban legends. It addresses some very controversial issues, including racial injustices and violence.

Unfortunately, some of the important messages “Candyman” appears to be trying to send get lost in some incredibly gruesome and often nonsensical scenes of violence. Yes, this is a horror and slasher flick. But at some points, it just seems to want to use the popular social movements of the day as a convenience. It’s almost a form of the gentrification it rails against.

There are decent performances from Abdul-Mateen (an Emmy winner last year for HBO’s “Watchmen”), Parris (“WandaVision”, “Mad Men”) and Domingo (“Ma Rainey’s Black Bottom”, HBO’s “Euphoria”), and overall, the picture looks great, with a good deal of the creepy “jumps” that comprise the horror genre these days.

But that big surprise or reveal that has become a trademark of a Jordan Peele project isn’t exactly here, and what is supposed to be the payoff may leave you wishing you’d skipped the candy and had a more substantial meal.

Dwight Strachan is the host/producer of “Morning Blend” on Guardian Radio and station manager. He is a television producer and writer, and an avid TV history and film buff. Email dwight@nasguard.com and follow him on twitter @morningblend969

‘Passing’ a near masterpiece 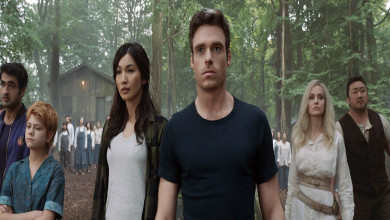 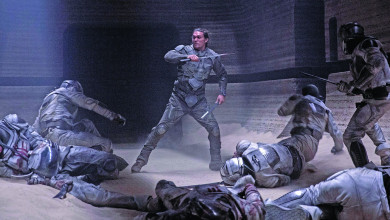 ‘Dune’ is a feast on every level, including the performances