A grassroots coalition called Our Islands, Our Future has threatened Bahamas Petroleum Company (BPC) with legal action if it attempts to mobilize its drilling machinery in preparation to spud its exploratory well by the end of the year.

The group stated in a press release that it is prepared to apply for an injunction if BPC does not heed its warning.

BPC Chief Executive Officer Simon Potter was sent a letter by law firm Callenders and Co. claiming that the company’s environmental impact assessment (EIA) process has not been completed, given that it had to make amendments when it changed the ship it intends to use for drilling.

“Because the EIA process is therefore not yet complete, the provisions of the Environmental Planing and Protection Act (EPPA) and the regulations made thereunder, both of which were extended to the whole of The Bahamas in September 2020, now apply to the project and to the EIA process, such that a full consultation process in accordance with this legislation is now required,” the letter states.

“Please note that our position is that a full consultation process has always been required (under the Planning and Subdivision Act, the Petroleum Act and under common law) and did not take place before the first iteration of the EIA was approved in February 2020, but the EPPA legislation fully codifies this obligation and puts it beyond doubt.

“We therefore look forward to a full, public consultation process being now being conducted in relation to the draft amended EIA. To that end, we have asked the minister for the environment and the director (of the Department of Environmental Planning and Protection) for the details of the format this process will take and for confirmation that we will be afforded the opportunity to participate.”

Executive Director of Waterkeeper Bahamas Rashema Ingraham, a member of the steering committee of Our Islands, Our Future, said the group’s intention is to “stop BPC from drilling in Bahamian waters”.

“We are very encouraged by the huge support, both local and international, that we continue to receive. Over 100 businesses and organizations have joined the Our Islands, Our Future coalition and 40,000 concerned individuals have signed the change.org petition. The petition numbers are growing every day.

“At the same time, we are disappointed with the lack of dialogue with the Bahamas government and are finding it necessary to ask the courts of law to step in and examine the approvals process. The company has been duly put on notice; any further actions to pursue or accelerate its plans will be undertaken at its own risk.

“The coalition had hoped to avoid legal action, which is why we wrote to The Bahamas’ prime minister about our concerns several times but got no response. Now, as the drill ship is about to sail, we have been left with no choice.”

BPC released a statement on Tuesday revealing that the government has extended its license period until the end of June 2021 as a result of the global COVID-19 pandemic, enacting a force majeure clause in the license.

The company assured in the statement that it is still on track to spud its exploratory well in the southern Bahamas next month, well ahead of its June date.

BPC Chief Executive Officer Simon Potter said in the statement that the Perseverance #1 exploration well being drilled next month and into next year is a potential “basin-opening well” with oil values that have rarely been recognized “outside of oil majors”.

Our Islands, Our Future intends to apply for an injunction if BPC’s drill ship leaves its current port in the Canary Islands to sail to its well location in The Bahamas.

“BPC has now officially been warned that its environmental approvals are being challenged and the company should not insist on launching the IceMAX drillship or taking any other steps towards drilling in defiance of the judicial review process.”

Bahamas Reef Environment Educational Foundation (BREEF) Executive Director Casuarina McKinney-Lambert said the coalition has found flaws in BPC and the government’s processes and is only asking that BPC “respect the legal process in The Bahamas”.

“We have asked repeatedly to be consulted on the details of the deal, to see the drilling licenses themselves, for access to more information on BPC’s insurance coverage and the environmental sensitivity maps they have supposedly compiled,” said McKinney-Lambert.

“It seems appealing to the courts is the only way to achieve some transparency.”

Emergency powers to extend to Dec. 28 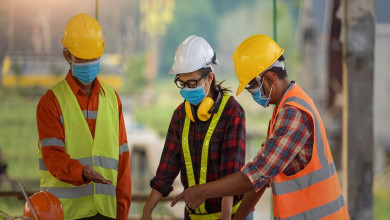