It was Bishop Hulan Hanna’s prayer that people understand that God is bigger than every barrier and hindrance that plagued them in 2022 and to have faith in 2023. And to look to God to supply the things that they need. Hanna said he was looking up to God that salvation would sweep the community, and that revival would take place.

For Church of God of Prophecy (COGOP) East Street Tabernacle members, under the guidance and leadership of Hanna, the senior pastor, a recent special community outreach effort served as a reintroduction of sorts to people in the surrounding communities of Sunlight Village and Sunlight Cottage, to know that they had not been forgotten. And that the church remains a “beacon of light, a reflection of God’s love, and a source of support”.

“Sometimes we look at things and we may feel from where we sit, as if we operate in abundance, so we may not be able to appreciate fully what these communities go through,” said Hanna. “There was a woman who came, and she got excited by the fact that we would be giving toys, and [following the event], I communicated with her, because she was really intrigued by the idea that her children would get gifts from us, so we were able to provide gifts for her children.”

Responding to the call to go into all the world and broadcast the news of God’s infinite love – pointing others to Christ, impacting hearts and changing lives, COGOP East Street Tabernacle ushered in the 2022 festive season with an outreach event that featured youth bands, free food and entertainment for the children. The objective was to connect with the community, before going into the holidays and the new year, to bring the community together.

“Initially, the plan was to have the praise team of each partnering church be a part of a massive praise and worship session, singing more seasonal songs. As the work began, through the direction of Minister Daren

Seymour and his team – Katherine Beneby II and Travis Edgecombe – the vision and objective evolved to include youth bands instead – the Bahamas Brass Junior Band, the Golden Gates Assembly Band and the Urban Renewal Band.

“We were streamed live on Facebook and other media platforms and that gave us even greater reach if only to be a witness to communities to let them know we were doing something. These communities that are depressed, economically so, it cannot be that the only entity that is reaching out to them are persons from the political class, their member of Parliament or others. I thought that as a church, we needed to do this in a big and meaningful way.”

For Hanna, the highlight coming out of the initiative was seeing the smiles on children’s faces.

“It was good to see a mother, who, when she found out about the toys, and when I saw the look on her face that she was going to get something for her children … for her two boys, I saw how it resonated with her in such a positive way; it really, really touched me deeply,” said the senior pastor.

“I saw hundreds of young people who came, got their food, some of the younger children in the bouncing castle, and there was not a single incident – no fighting, no cursing. In fact, we saw a few children, young people, from Street Reach (a COGOP East Street outreach program) who are all grown up now. Some of them are in their late teens and they’ve done pretty well for themselves in terms of adjusting to life as young adults. We took photos with some of them, and it was so important for us to see what happened to those children.”

As he reflected on the day, the bishop said an important takeaway for him was to see the transformation of young men who had passed through the Street Reach Ministry. Young men who he said when they first came to them, were deep in hostility and anger and frustration and wanting to lash out. He said in some of them, they saw the potential to either become a problem to others or to get in problems at the hands of others and that, for him, it was good to see them in a positive way.

Hanna credited PAnita and Philip Beneby for launching the ministry and for its success – even though it had been on hiatus. He said it was his intention to look at relaunching the ministry early this year, and was hopeful that he could engage a newer generation of young people who are coming up the ranks.

“It’s unfortunate some of the young people fell through the cracks but, for the most part, the ones that we saw there that day have done well. Some are in the Defence Force Rangers, others are working, some have even finished high school, so we are very encouraged – and by the grace of God, we pray that God will continue to keep them, particularly when you think about the amount of crime going on in the community. We certainly need God to keep these young people.”

Hanna expects the recent holiday extravaganza to become an annual event, if it’s the will of the Lord.

“I’d like to see it remain and become an annual institution in the community, which simply means that we would have to go out into the community much earlier and [connect with] the donors much earlier and engage people in a positive way who would want to participate in what I believe has been a very meaningful community and church activity.”

The COGOP East Street Tabernacle senior pastor’s wish was, “Man was lost, and God, in His divine mercy, had a plan for man’s redemption and that plan involved the first Christmas; it involved God sending His son Jesus Christ.”

He said the celebration wasn’t about a day, but the birth and salvation.

“I pray that we will understand that the God we serve is bigger than every barrier, every hindrance that has plagued us during 2022, and that we will go by faith which is the victory into 2023. I am also looking up, looking to God to supply all those things that we need; I am looking up to Him that salvation will sweep the community, that revival will be in the land.”

The recent outreach Hanna said was the church’s response to the call to go into all the world and broadcast the news of God’s infinite love – pointing others to Christ, impacting hearts and changing lives.

“After coming out of the pandemic, I decided it was time to show our face to the public again, so I sought the Lord and it came into my spirit that we needed to leave [2022] connected with our young people and our community. And I further wanted to have the involvement of the community from the churches that we connect with and, of course, the wider community,” he said.

Hanna said that while scheduling conflicts prevented some of the partnering and community churches from being directly involved, several gave generously, as did people from the wider community, including HG Christie Real Estate. As a result of the support and donations, each of the youth bands were presented with a donation of $500 toward ongoing efforts. The decision was also made to feed the children with hamburgers and hotdogs. Additionally, church members were asked to bring toys that were donated to children in the community.

“It was a very good effort. We had the bouncing castle, and we were able to defray the entire cost with the partnerships and walked away owing no one; I thank God for that,” said Hanna.

Several Bahamian vendors also came alongside the church to support the initiative, including Donkey Cone and LimeadeBahamas. 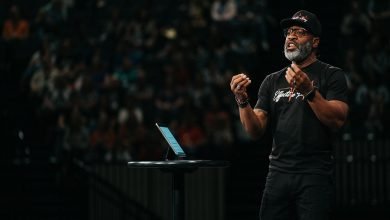