Fulfilling all expectations, the 34th edition of the Grand Bahama Conchman Triathlon made a successful comeback on Saturday after a gap, due to the COVID-19 pandemic.

By the close of registration at the pre-race meeting at Pelican Bay Hotel on Friday evening, Race Chairwoman Wima Steffanutti announced, “We have a total of 154 competitors overall, including individual and team entries for the main Sprint event and the newly introduced Mini Sprint.

“In addition to local individuals and teams, we have entrants from the UK, United States, Canada and Nassau.”

Race Day started early at 5:30 a.m. A colorful sunrise revealed cloudy skies and choppy seas, which caused a last-minute decision to modify the swimming course resulting in a short delay to the start of the main sprint race.

Race Director Phil Page explained, “Safety is always our number one priority and we decided to keep the course closer in shore and parallel to the beach.”

The invocation and The Bahamas’ national anthem were followed by a one-minute silence in memory and honor of two departed former founders and directors of the Conchman Committee, Bert Bell and John Bradley.

The initial leg of the 750m swim was from east to west along Taino Beach.

Waves helped to push the swimmers along and according to one competitor, made it feel like they were surfing.

The reality check came when they rounded the halfway buoy and had to fight their way back against the waves. A couple of swimmers actually gave up trying to swim and waded through the section in knee-deep surf.

First out of the water was 14-year-old Ayden Bain sprinting up the beach to the bicycle transition area and launching himself into the 20km bike ride.

Fighting off all competition, he managed to keep his place as individual leader. He switched from the bike to the 5km run and, retaining his lead, crossed the finish line a clear winner with a time of 1:13:26.

Ayden said it was exhilarating.

“I felt great through the whole race,” he said. “The course was well marked and very easy to follow with race volunteers making sure I kept on track. I’m really looking forward to my next race.”

Repeating her overall female winning success in the 2019 Conchman, the overall female sprint champion was again Sylvia Bateman, finishing with a time of 1:22:50.

Bateman commented, “It was a good race and very well organized. I felt very positive and really enjoyed the competition.”

The first female out of the water was team swimmer 11-year-old Isabella Cuccurillo, another great effort by this promising youngster after her victory in the local “Bert Bell Open Water Swim” event in September.

Ellie Gibson, 15, was the overall male winner for the mini sprint event with the shorter course of 450m swim, the 12k bike ride and 2.5k run, which was quite popular with 17 participants. Gibson had a time of 44.50 minutes.

The female winner was Kami Roach at 54.13 minutes.

There were 33 entries in the team event.

It was won by the “Kapa Lamber Lamber” team of Tafari Fountain, Leebert Gibbs and Leonardo Swain in a time of 1:07:16.

The iron kids race kicked off at noon with juniors ages four to 14 taking part; they all did really well, despite the rough water swim.

The overall winner was Anthony Knowles, 9, with a time of 13.32 minutes and the female winner was Seanna Norville Smith, 14, at 14.25 minutes.

Lori Roach, secretary general of the Nassau-based Bahamas Triathlon Association, was impressed with the vitality and organization that went into the event.

Roach said the association is taking this year’s winners, Ayden Bain and Laury Duncombe from Freeport, along with coach Sylvia Bateman to represent the Bahamas next week at the CARIFTA Games in Bermuda.

At 77, Baker was the oldest competitor of the event and took part in the mini sprint.

“I am delighted to be back and so pleased to see the vibrant young group who are making up the committee,” he said.

“They have done an exceptional job and the future for the Conchman looks great.”

Ina Leblanc, winner of the 60 to 70 female group, said, “[It’s] great to be back. I always look forward to the Conchman and, this year, the organizers have done a spectacular job,”

Thanks to Odessey Timing’s high-tech backup provided by the Bahamas Triathlon Association, every participant was tracked and timed, so they are able to provide full details and results.

Every competitor was given a medal as they ran through the finish line.

The awards ceremony took place at 11 a.m. and, in addition to the Main Conchman trophies, individual glass trophies created by local glassblower artist Sidney Pratt were handed out.

Staff from the recently opened Doctors Hospital was on site providing first-aid support and medical backup including an ambulance.

Grand Bahama Port Authority (GBPA) was the title sponsor, contributing extensively to the organization and promotion of the event, and GBPA official Fatima-Zahra Kaboub declared it a success.

“We are delighted with the turnout and it’s great to see everybody really enjoying themselves,” she said.

“It is always our goal to provide a safe, well-managed and fun event in a pleasant venue where fellowship and competition result in a great experience.” 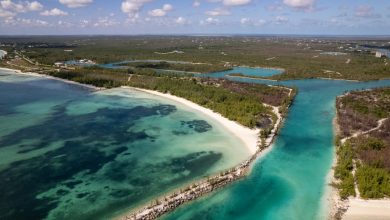 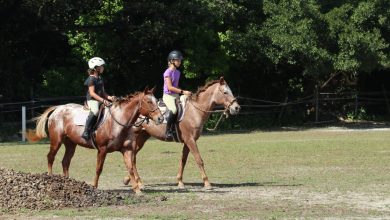 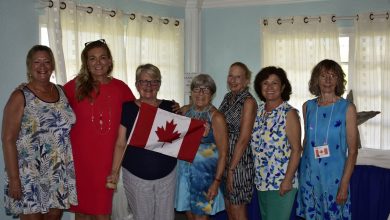 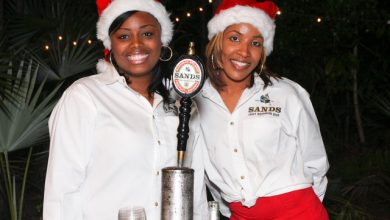