According to Maura, given the limited amount of berth space due to ongoing construction at Nassau’s cruise port, NCP hopes MSC will agree to begin its cruise sailings on Sundays, given that both Crystal Cruises and Royal Caribbean International (RCI) will have their ships in port on Saturdays.

“On Sunday we would put MSC at berth 16 because its the closest pier to the temporary arrivals terminal,” Maura said.

‘It makes the walk less for the passengers, it’s a more convenient berth from a guest perspective and so they get the benefit of that better berth by coming in on Sunday.

“There’s a material difference between home port sailing and transit sailing. The obvious is once you begin you’ve got the whole process of handling luggage and you’ve got ship provisioning, which requires trucks to have access to the piers to be able to load the supplies on the ship. So it’s a more involved process from an operations perspective and so we have allocated berth 16, which is the berth closest to land as a home port berth.”

Maura said Crystal Cruises will use berth 16 on Saturdays during its embarkation and debarkation processes, while RCI’s Adventure of the Seas ship will use berth 22, which is the center berth at the cruise port.

Berth 16 was the first pier NCP’s general contractor began to renovate last year. Maura said 500 feet of berth 16 will be completed in time to support the ships coming in beginning next month.

According to Maura, NCP has ordered two luggage scanning machines for the home porting process, while RCI is providing two more, which it is bringing in to Nassau next week.

He said NCP’s luggage scanners were part of the original port redevelopment plan and were ordered early to support the home porting initiative.

Maura said ahead of RCI’s first cruise it will conduct some test sails to ensure that all of the necessary protocols and procedures are in place.

He said around June 8 or 10 RCI will carry out its technical cruise intended to “kick the tires on various protocols and iron things out before the formal June 12 sailing”.

Cruise home porting is being touted as a tourism game changer for The Bahamas.

Carnival Cruise Line released a statement yesterday announcing more cancellations and expressing hope that the cruise line would be able to begin sailing out of US ports by July.

The US Centers for Disease Control and Prevention (CDC) continues to bar cruise lines from cruising with passengers from the US, which prompted RCI to begin its home porting initiative from Nassau.

Carnival has been hesitant to pull the trigger on home porting outside of the U.S.

“Carnival hopes to begin operating sailings on three ships from Florida and Texas, including Carnival Vista and Carnival Breeze from Galveston and Carnival Horizon from Miami,” Carnival’s statement noted.

Carnival President Christine Duffy added: “We continue to have constructive discussions with the CDC, but still have many questions that remain unanswered. We are working diligently to resume sailing in the US and meet the CDC guidelines.”

New icon in an old city 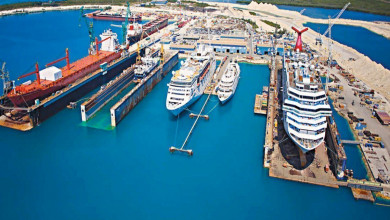