Minister of State for Disaster Preparedness, Management and Reconstruction said yesterday that to date the government received $364,000 of the $1.7 billion that was pledged by private donors for Hurricane Dorian recovery.

“Of course, you know a lot of funds were pledged from the pledge conference,” he said.

“We got over $1.5 billion pledged. However, we’ve received $364,000 in cash and deposits. So, there is a serious shortfall. And on top of that, with the COVID-19 pandemic, a lot of priorities shifted for persons who may have made pledges.”

He added, “There is no way we can force anyone who made a pledge to give us their pledge, but we are hopeful that those who pledged will honor their commitment. And as the [funds] come in, we will use it in the community, and I will be able to account for, as I have done in the past, how the funds were spent.”

“There was an influx,” he said.

Lewis added “So, we did not collect all that was pledged, but we will do our best to accommodate Bahamians because housing was one of the six pillars under which we are operating.

“We want to make sure that our citizens are back in their homes.”

Lewis said nearly 5,000 people registered for the program, and the government is working on addressing issues with the timeliness of payments to those trying to rebuild their homes.

“We are addressing it right now because it is a matter of serious concern.”

He added, “The important thing is that we are aware and we are making an effort to correct it.”

In June, Lewis said the government received a total of $1.771 billion in pledges during a United Nations Development Programme (UNDP) Hurricane Dorian pledge conference in January.

Minister of Finance Peter Turnquest confirmed that the donor is the P3 Group, Inc.

The Guardian has reported that P3 Group, Inc. had pledged $975 million of the initially announced $1.5 billion total in pledges. Soon after, it was discovered that the amount the group pledged was in the form of a loan to the government.

Since then, there have been many questions over the status of the pledged funds and how they are being spent. 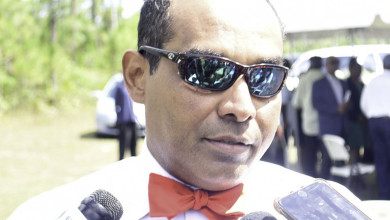