Christmas morning excitement is an emotion unmatched by any other – waking up to find that in those beautifully wrapped packages is exactly what you asked Santa for and then there are the extras that you didn’t even know you needed, but were delivered all the same. The feeling you get on Christmas Day is akin to the feeling you get when you have ordered and received your curated Variety Is the Spice of Life Series food parcel by Events by Alexandra. You know what you’re getting, but there is still excitement in opening your box to take in its contents.

So, I knew what I was in for when I ordered the recent “Breathtaking Vietnam” box for two featuring Alexandra Maillis-Lynch’s interpretation of the cuisine of Vietnam – fresh spring rolls with shrimp and pork; bo kho (spicy beef stew with noodles); fresh salad platter; boneless stuffed chicken wings simmered in caramel sauce; roast duck with spicy orange sauce; white rice; green papaya salad with vegetables, calamari and grapefruit; coconut flan; – and I opted for the jelly, lime and lychees drink offering because it just seemed so … well, for lack of a better word – interesting.

Opening the box is when that feeling being like a kid on Christmas morning kicks in, because I’m getting to finally view the finished product and delighting in glee because Maillis-Lynch always adds in extras that she never publicizes, to push the anticipation level even higher.

One of those surprises was fried spring rolls (nem cua be) – rice paper roll filled with a mix made from pork, shrimp, crabmeat, mushrooms, garlic, carrots, fresh herbs, sugar and fish sauce which are then deep fried until crisp, which she encourages you to wrap in iceberg lettuce, top with fresh herbs, carrots, radish pickles and some cellophane noodles and dip into your favorite sauce. Options included nuoc mam (fish sauce) and nuoc cham, pineapple and anchovy sauce (mam nem) and I loved them all. She also offered pickled carrots and daikon radish to help cut the sweetness slightly with dishes like the stuffed chicken wings (canh gak ho gung).

And then there’s the script that comes with it which gives insight as to how she encountered the cuisine, so it was insightful learning of her first encounter with Vietnamese food, after stumbling into an empty Vietnamese restaurant in Boston’s Chinatown while on a family trip as a young mother and being presented with the iconic beef pho and the magnificent platters filled with fresh basil, mint, coriander (cilantro) beansprouts, glistening noodles, bright red chilies and juicy limes. She was stunned!

And nine years from that introduction, Maillis-Lynch actually went on a Southeast Asian trip with her niece Catherine and nephew Alistair – and North Vietnam was included in that itinerary. She describes it as “the adventure of a lifetime” – breathtaking and unforgettable and of being fed amazing giant crabs, enormous prawns and huge succulent oysters.

While I’ve not visited Vietnam, like Lynch, I was introduced to Vietnamese food in the United States. Beef pho, the noodle dish, was also my introductory dish to Vietnamese cuisine followed by banh mi which literally translates to bread, but is most frequently used to refer to sandwiches traditionally made of a variety of pork products with pickled vegetables stuffed into a toasted baguette. Then I also shared a flat with a Vietnamese for three months in the early 2000s in Cardiff, Wales, and fell in love with the cuisine with its complex flavors and contrasting textures. So, when I realized Maillis-Lynch was showcasing the cuisine of Vietnam, I think I was first in line. (Actually, no I wasn’t. I barely made it in; she was literally sold out, by the time I placed my order, the parcel was that popular.)

Suffice it to say it was a delight to indulge in Maillis-Lynch’s Vietnamese interpretations and mixing and matching things with the sauces from the nuoc mam (fish sauce) and nuoc cham, to the pineapple and anchovy sauce (mam nem) and found that I loved them all. She also offered pickled carrots and daikon radish to help cut the sweetness slight with dishes like the stuffed chicken wings (canh gak ho gung).

Since her Vietnamese offering, Maillis-Lynch has explored the cuisine of Mauritius, and prepared a Thanksgiving feast.

Today is the 23rd edition of the series and the featured cuisine in celebration of “St. Nicholas Day Traditions” will include roast duck with orange-cranberry glaze; roast stuffed pork with apples and mustard, French-style; cold decorated poached salmon with cucumber-dill mayonnaise; baked seafood crepes, German meatballs; red wine poached pears with stilton cheese; and a mini bouche de Noel; with eggnog and Christmas punch (non-alcoholic) for the optional drinks.

Traditional Christmas dinner is showcased for the 26 dinner for delivery on Thursday, December 24, and her gift to you in this instance is that you get to build the box you want and select eight items from a menu of 32 offerings.

To ring in the new year, the 27th box of 2020 will be about celebrating and feature baked bacon-wrapped dates stuffed with almonds; smoked salmon asparagus and Boursin spirals with dill mustard; spicy creamy crab and roasted red bells bake with nachos; mini salmon cakes with Sriracha aioli; Bahamian lobster salad with romaine spears; Spanish-style stuffed mussels with aioli; seared beef tenderloin with horseradish cream; lamb and feta puff pies with tzatziki; oxtail marmalade empanadas; and Grand Marnier mousse with chocolate dipped strawberries. And in a true New Year’s Eve celebration, except for two at your house, the food parcel will come with New Year’s Eve favors, and will offer optional drinks of champagne/prosecco.

Events by Alexandra’s Variety Is the Spice of Life Series can be experienced by emailing alexandra@eventsbyalexandra.com or WhatsApp 557-3557. 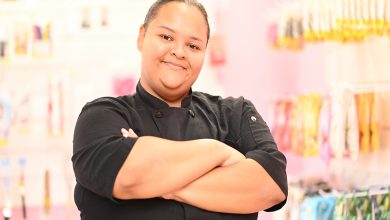 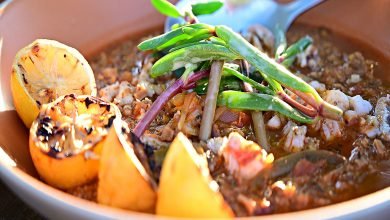 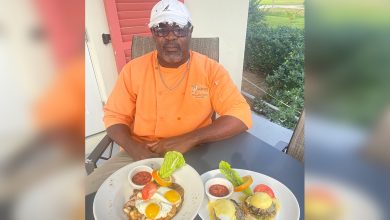 Outstanding in the field takes to the beach