Although breastfeeding is a job performed by a mother, the Bahamas National Breastfeeding Association (BNBA) has proved that it’s actually a shared responsibility that involves fathers and every member of the family. On International Men’s Day (November 19), five fathers of breastfed babies were celebrated and recently received trophies from the BNBA for their efforts as parents and for promoting breastfeeding to others. The honorees were Victor Darville, Ricardo Edwards, Thaddeus Pearce, Kevin Moree and Dr. Cleveland Eneas III. In a special Zoom session for fathers during National Breastfeeding Month, they shared their experiences as fathers of breastfed babies.

The fathers gave their reasons why they support breastfeeding, including giving their babies the healthiest option for feeding; the calmness of the baby; the closeness and bonding; and the overall health, development and intelligence of their babies. They shared how they would burp the baby once the baby was fed by their spouse and also spoke about storing breast milk and assisting with feedings. The Zoom conference was facilitated by BNBA Proxy President Ampusam Symonette, President Trineka Hall, Secretary Tamica Gibson, member Debbie Munnings, Nurse Anna Forbes and midwife Bianca Edwards, who is also a breastfeeding mother.

The government has already signed on to the Innocenti Declaration on the Protection, Promotion and Support of Breastfeeding and the Ministry of Health already has information on its website about the Baby Friendly Hospital Initiative, launched in 1991, by the World Health Organization, but Moree believes more needs to be done. From his experience, he has seen that the three-month maternity leave is not enough time for a mother to heal or properly bond with her baby before returning to work and having someone else care for the child. He encouraged the BNBA to get the churches and members of Parliament involved in understanding the importance of breastfeeding.

Eneas shared, “Motherhood is demonstrated in every aspect of the church. Breastfeeding is not a standalone reality, it is actually a part of life. We try to educate and make others aware about breastfeeding.”

Pearce shared how he helped his wife as much as possible, so she could focus on feeding the baby. Edwards suggested that men play an important role in encouraging other men to support their partners in breastfeeding instead of buying formula, especially in the first few days of life.

Darville pointed out that in many cases, fathers are not in the home. “This results in many mothers being stressed out throughout the pregnancy and after the delivery,” he said. “It can negatively impact a mother’s ability to breastfeed.” This is why the BNBA wants the public to know that the entire family has to support breastfeeding mothers.

The idea of breastfeeding as a shared responsibility was brought to life with an umbrella decorating competition held to close out the BNBA month of activities. The “Umbrellathon” event was held under the patronage of Carlotta Klass, the first BNBA president. This year’s event had 17 participants – 15 from Nassau and two from the Family Islands (one from Sandy Point Clinic, Abaco and one from Lower Bogue Clinic, Eleuthera). Scores of Bahamians were present at the event and they were reminded that breastfeeding is a shared responsibility, involving the mother, the father, the family, the church, the school, community, and the government.

Aliv Chief Executive Officer John Gomez was among the judges for this years’ Umbrellathon. “A few common points that resonated for me regarding the merits of breastfeeding were nutritional benefits, shared responsibility – involvement of the entire family,

community, business entities providing proper and adequate facilities – which, of course, hinges on the need for legislation. This event certainly helped to raise my awareness. I am particularly pleased that Aliv has been able to partner with the organizers of this event to do its part in assisting in helping to drive awareness across all communities.”

“It takes a village to raise a child; it takes all levels of the community to help support breastfeeding,” said Hall. “This support will benefit our young and the future of our community.”

Act fast when a tooth gets knocked out 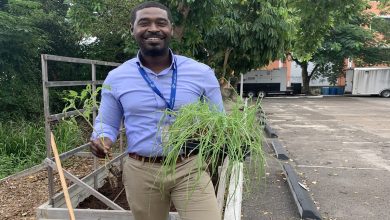 Healthy feet for persons with diabetes