Despite Grand Bahama Utility Company’s (GBUC) efforts to provide potable water, and at pressure levels pre-Hurricane Dorian, it will be a huge challenge for years to come, said Dr. Michael Sukop, professor in the department of Earth and Environment at Florida International University (FUI).

Sukop told Grand Bahama News that it may take years for the island’s natural water supply to be rid of the salt content deposited in GBUC’s wellfields as a result of flooding from the storm in 2019.

“The flood damage to the water system was devastating,” he said.

Sukop followed the island’s water restoration process in the immediate aftermath of Dorian.

The storm flooded 70 percent of the island, primarily in the eastern district where GBUC’s wellfields are located. The company’s biggest water supply well, W6, was severely damaged, inundated by 20 feet of flood water for three days.

GBUC invested $5 million in the reverse osmosis (RO) system after Dorian and, through the process, is providing blended – RO and natural water – to its consumers.

Sukop noted that while pH levels are significant, the parts per million (PPM) is more crucial. PPM measures the total dissolved solids, including salt in the water.

“The blending is necessary,” he said.

“The utility faces challenges because RO is so expensive. To produce enough water to blend the other saltier water down to a drinkable level can be quite a challenge.

“My understanding is that there is a standard for the water, which, in the US, is 250 to 350 PPM. That’s what is called secondary standards – guidelines (taste, color and odor) established to protect the public against consumption of drinking water contaminants that present a risk to human health.”

When asked about GBUC’s PPM levels, Grant said, “GBUC’s potability for drinking water, which is a secondary standard for the palatability of the water, meaning how the water tastes to consumers, [is in keeping with the standard of WHO which] is anything under 1,000 or below.” Grant did not quote actual figures.

Additionally, she noted that the lower pressure output is to ensure the company maintains potability and that the resource is available for future generations.

Meanwhile, East Grand Bahama homeowner, Lisa Pokash, who has been testing her water supply since Dorian’s historic flooding, said for the first year, the water hovered around 1,900 PPM total dissolved solids, including salt.

“This level is listed as undrinkable and unacceptable by the WHO,” Pokash stated.

Noting that she was optimistic after learning of the installation of GBUC’s RO system, she said, “Once the RO system was in place, our water instantly improved to around 160 PPM because the RO became the sole source of our water for a short period of time.

“Since that time, the RO water has been integrated into the island-wide delivery system and our readings have crept back to 600-700 PPM, and our tap water has returned to being undrinkable.”

“So, we are spending money to ensure there’s legitimate potable water in the restaurant,” Tibbits said.

“It added up to thousands of dollars over the past year. We’ve recently decided to purchase and install our own RO system because, from what we understand, the potability of the water being supplied is acceptable according to the utility company and therefore we should not expect any change.”

She added that the level of total dissolved solids (TDS) that is deemed “fair, poor and unacceptable” by the WHO is where the island’s water levels teeter.

Tibbits said, “None of these words work for us, when you’re talking about consumption and one’s well-being.”

Questioned about customers’ salty water complaints, two-plus years after the storm, Grant said, “We had an unprecedented impact on the aquifer.” (An aquifer is a body of rock and/or sediment that holds groundwater.)

Grant noted that previous storms – Frances, Jeanne, Matthew –  and most recently, Dorian, have had a serious impact on the island’s aquifer. Dorian’s flooding resulted in heavy salt content water not only affecting W6, but also GBUC’s remaining wells.

“In order for us to return potability to all of our customers, we had to invest in a reverse osmosis system,” she added.

It is a first for the second city which had always relied on its own fresh water supplies.

Sukop said that the quality of water from the aquifer could continue to decline, in the event of continued storms, flooding and rising sea levels.

“I would hope that the rains begin to stabilize it in time, but we have an additional problem of sea level rise which is a huge problem for any coastal wellfield because as the sea rises, salt water intrusion is more likely and you don’t want to produce super salty water,” he explained.

“You can’t do anything with it other than install an RO system.”

The RO system has been fully operational since October 28, 2021. It filters three million gallons of raw well water per day. A demineralization process removes most salts, organics, bacteria and pyrogens from the water.

Prior to the storm, 250 wells provided the island with natural ground water.

The company has added 75 new wells to its distribution system.

“We looked at areas that Dorian did not flood, using our flooding map based on studies with experts, NGOs and our ecological team to find more water sources,” Grant said.

She added that with the combined efforts – repairs to the company’s existing wells, the addition of new wells and the RO system – “we once again have full island-wide potability that meets WHO guidelines for drinking water, which this country and other jurisdictions are governed by.

“We are looking for the most efficient way to provide our customers with safe potable water at the least possible cost. To provide RO water is very costly and to mineralize the water, which is necessary, after the process, is also very costly,” Grant said.

She said GBUC uses a natural, more efficient way to add minerals back into the water to make it safe for customers.

While acknowledging that GBUC is taking the right steps to reverse the extensive damage to Grand Bahama’s aquifer, Sukop nonetheless cautioned that in light of the climate change predicted to continue, the full restoration of the water supply will be an “uphill battle”.

Art created to inspire care for the environment 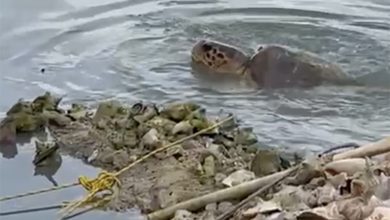 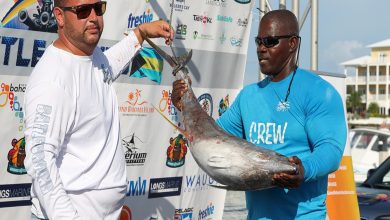 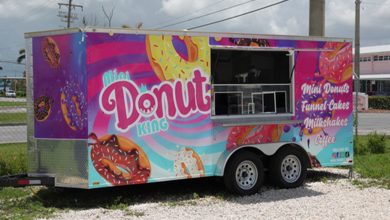