Progressive Liberal Party (PLP) Deputy Leader Chester Cooper said yesterday that the government should move forward with legislation to decriminalize marijuana and legalize the substance for medical use.

His comments came a week after Prime Minister Dr. Hubert Minnis announced his support of decriminalizing the drug.

“The prime minister must do more than talk,” said Cooper.

“It is his duty to act on his convictions and lead. The prime minister should have already directed his attorney general to draft the necessary legal reforms, and they should be brought to Parliament.

“I am ready to debate this issue in the House of Assembly at any time.”

Cooper said the government’s decision to await a report from the Bahamas National Commission on Marijuana does not make sense.

In July 2018, CARICOM’s Regional Commission on Marijuana recommended the declassification of marijuana as a dangerous drug in all legislation and the reclassification of the drug as a controlled substance, noting it should be treated similarly to tobacco and alcohol.

Minnis indicated last week that he expects the local commission’s report to be very similar in its findings.

Cooper said, “While many Bahamians suffered, and continue to so do, under a condemnable policy and statute approach, the government dithers awaiting a delayed report from the marijuana commission.

“[It is] the same commission the prime minister says he does not expect to report anything significantly different from the CARICOM commission on marijuana.

“That commission has come to the same conclusion as I have, and now the prime minister. Marijuana should be treated as a controlled substance and not a dangerous drug.”

Cooper called for the “persecution” of marijuana users to end. He also urged the government to ensure that Bahamian entrepreneurship is encouraged by establishing a process to monitor the growing of marijuana in the country.

“We need to move on from this punitive practice of denying those in need of medical treatment,” he said.

“We must end this persecution of those who are only interested in using marijuana for recreational and religious practices.

“There must also be a process for the safe and monitored growing of marijuana in The Bahamas by Bahamians in order to steer people away from the illegal trade. We need to ensure we set up a sensible framework for the development of the industry so we can encourage Bahamian entrepreneurship.”

Cooper said he believes marijuana should be used only in private, and called for laws to ensure public safety.

“The public use of marijuana should also be subject to ticketing,” he said.

“[L]aws should be passed to ensure people are not driving, piloting, working in the public service or operating dangerous equipment under the influence of marijuana.

“We must also be sure to protect minors from the influence of marijuana as we see happening all too frequently. Research has showed it should not be used by adolescents.”

He added, “We can approach this in a sensible, mature manner that actually benefits The Bahamas. It is my sincere hope that though late, the prime minister is serious about this issue.

“It would be a shame if we continue to tarry much longer while Bahamians are disadvantaged.”

Minnis said he intends to discuss the marijuana issue with Cabinet as well as the public. If marijuana is decriminalized, he said the government will embark on a “vigorous” education campaign that will be aimed at different sectors of society, including high school students.

UN says there was a fuel leak at BPL on Abaco

Worry abounds as clock winds down on govt assistance 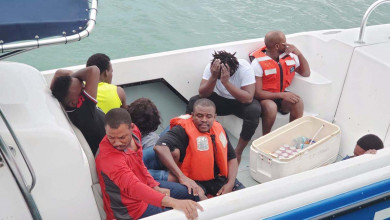 Fishermen who pleaded guilty to prohibited fishing placed on probation