Hermaine Thompson and her fiancée Tamaro Rolle are breathing a sigh of relief today as their infant daughter can have the lifesaving surgery she desperately needs to repair a heart defect she was born with, courtesy of an anonymous donation of $85,331 paid to a GoFundMe account organized by an American friend to give their daughter a fighting chance at life.

“I just want to get the surgery done,” said Thompson.

She has been told that once Ta’mayah has her surgery, she would be a healthy child who, in the early days, would be able to feed from her bottle freely without getting tired, and in the long term, be able to run around like a normal child.

“She gets tired real fast, so she breathes really hard.”

During her pregnancy, Rolle said she considered her unborn child her “miracle” baby, especially after she learnt her child’s sex and that she was pregnant with a girl, after having given birth to two sons – Tehran Jilla, 23, and Michael Thompson, 18.

“I wanted a daughter,” said Thompson. “She was like a miracle. I was so ready for it mentally and physically,” she said of her pregnancy.

Two days after giving birth, she learned the little girl she would name Ta’mayah had Down syndrome, and a test by pediatric cardiologist Dr. Jerome Lightbourne revealed Ta’mayah needed surgery to repair a hole in her heart – atrioventricular septal defect (AVSD) – a heart defect in which there are holes between the chambers of the right and left sides of the heart, and the valves that control the flow of blood between the chambers may not have formed correctly. In AVSD, blood flows where it normally should not go. The blood may also have a lower than normal amount of oxygen, and extra blood can flow to the lungs. The extra blood being pumped into the lungs forces the heart and lungs to work hard and may lead to congestive heart failure.

After coming to terms with the Down syndrome, she said doctors then told her that Ta’mayah, within the first six months, would need heart surgery, which would cost thousands of dollars to repair the hole in her heart.

The hospitality sector worker who at that point had been furloughed for six months due to the pandemic, and her fiancée, a dive instructor/boat captain who is also out of work as his place of employment in one of the southern islands had closed its doors, said she was left wondering as to how they would come up with the funds to give their daughter a fighting chance at life.

“I was like how am I going to do this? I don’t have the finances. But I trusted in God knowing he gave me this baby knowing she has Down syndrome and a heart defect.”

Thompson reached out to the Sir Victor Sassoon Heart Foundation, an organization which assists children who otherwise would be unable to receive cardiac care.

Thompson and her fiancée spoke to his friend Tony Pfau, from Denver, Colorado, who her fiancée dives with and whom he remained friends with over the years, to help set up a crowdfunding site, through the foundation’s American counterparts. The crowdfunding page went live on February 6. Nine days later, Thompson received an email from Pfau telling her to check the page as there may be good news. Pfau told them that there was an anonymous, generous donor wanting to donate $85,000-plus, and that they were waiting verification and processing of the money on that end.

“When he said that, I just broke down in tears and told him to give me time to myself. I couldn’t believe it. I said God, you’re a miracle worker, you gave me this money. I have no money to take care of [Ta’mayah] and her surgery.”

Thompson said to process it all, she just needed a minute to herself.

She said her fiancée was speechless.

Since the donation, Thompson and Rolle have since learnt the anonymous donors live in San Diego and they have since spoken.

“They just said they wanted to help. The exact words they said to me was, ‘We are happy to let you know that the cost of the surgery to Ta’mayah is taken care of. Please keep us updated on her progress and we will pray for you all.’”

Thompson said she looks at the donation as a “miracle”. Before the anonymous $85,000-plus donation, Thompson said the amount they had raised was approximately $7,000 and nowhere near what they needed for Ta’mayah’s surgery.

The only thing Ta’mayah now needs to do is make weight. She has to be at least 10 pounds for the surgery to happen. Thompson shared that they have an appointment with Dr. Lightbourne on Thursday to see if Ta’mayah makes the weight.

Thompson said her hopes and dreams for her baby are limitless.

“I wouldn’t want to limit her from anything. I don’t look at her to be any different from any child and what you put in is what you get out.”

The mother of three said her sons are both in love with their baby sister who she admits is “the apple of their eyes”.

“They are in love with her. I told my middle son, [Michael] they have these Down syndrome dolls, he said ‘Mommy stop emphasizing the Down syndrome, she has it, but it [Down syndrome] don’t have her.’”

Thompson’s “miracle” has taken place during heart awareness month, a special time to bring awareness to people to the need to take care of their hearts, and to raise funds to save children who are in need, because no one ever knows when they will need the help.

The foundation has assisted thousands of children since their founding in 1961.

The Bahamas Heart Association is an educational branch that helps to instruct the public on leading heart-healthy lifestyles. The association also raises funds that can assist the Sassoon Foundation. 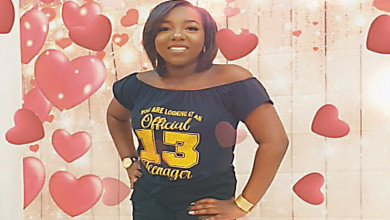 For the love of Hayley 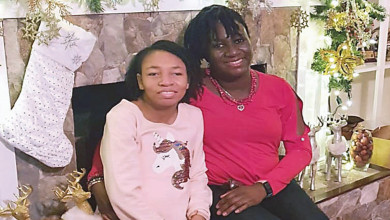 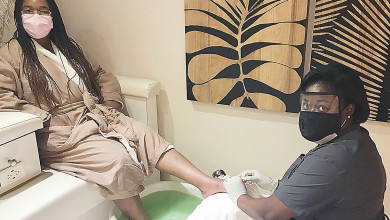 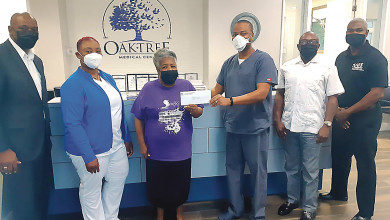