If Bahamians are looking for heroes, they don’t have to look very far.

Just Over-the-hill, as they call it here, to a densely populated community known as Bain Town in Nassau where the strong survived and all the churches combined could hardly hold the confessions and prayers of their congregants, and where in that hardscrabble hood, to a girl with grit.

Her name was Pauline Davis. She started running sideways, usually barefoot, carrying buckets of water from a public pump, looking over her shoulder to stay steps ahead of the boys who chased and frightened her. Sometimes she beat them back by running straight up a palm tree.

Pauline ran so hard and so fast and so consistently she ran her way right to the top of track and field.

Now, in a new book with award-winning author T.R. Todd (Pigs of Paradise, The Man Behind the Bow Tie), the fearless competitor tells her story, revealing fears, excitement and the cruelty and just a whole lot of bad luck piled on top of good.

The book is called “Running Sideways: The Olympic Champion Who Made Track and Field History”. The foreword is by Lord Sebastian Coe, an Olympic champion himself and, since 2015, president of the World Athletics Association.

He calls Pauline’s achievements – competing in five Olympics, sprinting to gold twice in the 2000 Olympics in Sydney, Australia, once in the 200m individual and with the Golden Girls 4 x 100m – Herculean, given the path she trod to get there.

“But it was not until reading Running Sideways that I had insight into the boulder-strewn nature of that path, from the adversity and social challenges of her youth bolstered by the undying love of her parents through to the unwarranted battles that she’s waged and won with myopic sports administrators,” writes Coe, referring to episodes where Pauline had to scale the wall of the stadium to run the field, training to represent her country in regional and global events.

Publisher’s Weekly praised the book and the story it tells of a young barefoot runner who had to save her shoes for school and church who went on to become a two-time Olympic gold medalist, the first to win individual gold in sprinting in the region and the first woman of color to serve on the World Athletics Council.

There is such depth to the character who is Pauline, tough as nails and soft as lamb’s wool, that all Todd had to do was tell the story of her life honestly. It is a story worthy of a movie script, a big screen full feature film that millions around the world of every age will relate to – and dream of doing the brave and courageous thing.

Todd was a perfect choice to be narrator for a story which lifts the spirits without disguising the dirtier truth of parts of the world of sports. The two became friends when he was business editor of The Nassau Guardian and AP correspondent for The Bahamas.

A runner himself, though not competitive, Todd was fascinated by what he heard about Pauline and when he organized a fundraising race in Exuma after leaving The Bahamas physically but maintaining a business interest, he asked her to be the patron. She accepted and has done so for the past four years, helping to raise tens of thousands of dollars for Exuma youth and scholarship programs.

At 55, and still in excellent condition, Pauline is retired from competitive running and from the Ministry of Tourism where she worked as a brand ambassador for 20 years. Today, a new brand ambassador, multiple Grammy award winner and international rock superstar Lenny Kravitz added his admiration for the trailblazer.

“Pauline Davis is a brilliant example of Bahamian excellence and perseverance,” wrote Kravitz this week. “I remember as a youngster, my Bahamian grandfather having us go out as a family to watch and support Pauline and the other Bahamian athletes at the 1984 Olympics in Los Angeles. Pauline later mesmerised the world in Sydney 2000 with her gold medal winning Olympics performances and her star continues to shine today through her mentorship of young Bahamian athletes.”

The entertainment superstar joins a long list of all-star endorsements from those in the track and field community, including four-time Olympic gold medalist Michael Johnson from the United States, two-time Olympic champion and former world record holder in the 100 metre Donovan Bailey from Canada, and two-time silver medalist Juliet Cuthbert-Flynn from Jamaica.

Published by Rowman & Littlefield, the book is now available on Amazon and the publisher’s website. Books will soon be available at local stores here in The Bahamas, with a special book signing event planned for March 8 at Goodman’s Bay. 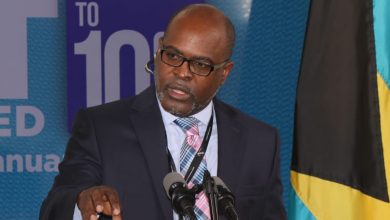 Woman pleads with judge to release boyfriend she said beat her