Considering the role of politics in the previous administration’s refusal to act aggressively against the country’s third wave, former Prime Minister Dr. Hubert Minnis and former Health Minister Renward Wells’ current gratuitousness in the face of mounting COVID deaths comes as no surprise.

Painful for those who mourn and for those who work to preserve lives in the healthcare sector, is the latest reminder of how putting politics before people contributed to potentially avoidable SARS-CoV-2 infections and COVID deaths over the last 17 months.

It was sterile machiavellianism that saw a competent and qualified Minister of Health in Dr. Duane Sands – under whose watch the country’s first wave was conquered in less than two months – pushed out of the Minnis Cabinet, to be ultimately replaced by Wells whose tenure was anything but stellar.

Sacrificing protection of residents and the country’s fragile healthcare system in pursuit of tourism inflows and the political capital it could amass, necessary health protocols at the border and beyond were either abandoned or left woefully unenforced, advancing the country’s virulent second and third waves.

It was politics that fueled the Minnis administration’s unwillingness to publicly acknowledge even the existence of the third wave before being forced to do so by the declarations of health professionals, who spent the better part of the pandemic bemoaning the administration’s stubborn rejection of calls for meaningful consultation.

As case numbers skyrocketed in New Providence – putting the rest of the country at higher risk due to continuous inter-island travel – and as deaths across the country soared, campaigning well in advance of when elections were due ramped up, and a clear need for stronger restrictions in the nation’s capital was ignored in favor of keeping voters happy.

But regrettably, the country’s healthcare system deteriorated under 19 months of emergency rule, with its weakened frame placed under heightened threat via the former prime minister’s ill-conceived attempt at maintaining power in September’s snap election.

Minnis and Wells’ record of putting politics before people in the COVID response is irredeemable, and their recent comments under the guise of concern for the public ring as a hollow grasp for political relevance at a time when the country’s pandemic response can ill-afford such distractions.

What the Davis administration must not do, is follow along a similar path by choosing not to implement certain categories of restrictions where deemed necessary by health professionals, because such restrictions might not seem to coincide with protests the governing party made while in opposition.

The administration laudably plans to table legislation to manage this and other public health emergencies, but The Bahamas has a long history of lax enforcement, and there is not a sense post-election that enforcement of existing health protocols has been strengthened.

Trotting out new legislation in grand style without having adequately-resourced enforcement and health surveillance mechanisms in place will not yield necessary results.

Throughout the pandemic, testing levels failed to keep pace with the activity of SARS-CoV-2 in-country, and though case numbers appear to be trending downward this month, low testing days yielding a low number of cases while presenting a relatively high positivity rate, suggest that we are not yet close to being out of the woods.

Beyond free COVID testing to be offered on Inagua in response to a spike in cases there, the minister of health and wellness should advise on timelines for the availability of free nationwide PCR testing on demand, and the ministry should pursue nationwide access to surgical-grade face masks as a matter of priority.

Worldwide, the COVID-19 response together with scientific initiative have been polluted and markedly compromised by politics.

Self-serving and vainglorious politics mortally failed us under the previous administration.

We urge the Davis administration to be principally guided by advice from a broad cross-section of health experts, and to be committed to its pledge of newness by relegating politics in governance to its appropriate place.

Corrupt Bahamian politicians are molded in our own fallen image 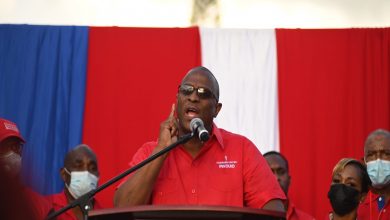