Nomnom refers to the pleasurable eating noises when eating something tasty, so it should not be too much of a surprise that when siblings Sakinah and Sumayyah Cargill decided to bring to the public a Middle Eastern kitchen and store serving noms (food) inspired by the Middle East and North Africa, that they decided to name it Nom Nom Pita.

They also retail an assortment of dips and sauces, including hummus, baba ghanoush, and toum (garlic sauce) made from local produce.

The Cargills are no strangers to the cuisine. They experienced the flavors of the vast Muslim world growing up within the diverse community in The Bahamas. The opportunity to live in Canada furthered that food experience for them. Their return home, meant they missed the global diversity in restaurant options. The siblings said it only made sense for them to combine their own experiences to bring Nom Nom Pita to the Bahamian public.

“Some of the ingredients are hard to source, and the techniques involved in creating authentic flavors are difficult to replicate, but we frequently receive compliments from persons who are familiar with the food. We take food very seriously at Nom Nom Pita. And our kitchen reflects that,” said Sumayyah.

The veggie pita, she says is definitely a must-try item. “At just $6, it’s a healthy and affordable meal filled with roasted mushrooms, radishes, carrots, and drizzled with hummus and turmeric yogurt. It’s bright [and] refreshing, and like nothing else on the island. We offer a ton of add-ons, including crispy cauliflower, chicken, steak, fish, shrimp, and falafel.”

Patrons are encouraged to customize freely and to their liking.

“For those who are a bit hungrier, any of our lunch mains offer a variety of good options. The mutton tagine is soft, tender and rich. The fish filet is lightly seasoned and pan-seared – the simple presentation highlights the freshness of our fish.”

For a person being introduced to Middle Eastern and North African cuisine for the first time when they step through the doors to Nom Nom Pita, Sumayyah recommends the sampler platter which she says allows them to get a good mix of items.

“The assortment of breads, salad, meat, and dips, makes for a fun and interactive dish,” she says. “We chose items that would be relatively familiar for most people, but with a flavor profile that this in keeping with our brand. We encourage our chefs to be creative and experiment, so while we have a constant menu, there is something new every day. Limited edition dishes have included our fish cakes with chermoula sauce served over nutty couscous, and baklava cheese crepes. Some of these items are available for one day only, so we recommend that people follow us on social media to keep abreast of new items. Items change based on what is available – for example, tomatoes are coming into season now, so guests can look forward to features like a roasted tomato and red pepper soup topped with Zaatar (spice mixture) yogurt and served with toasted focaccia finger sandwiches.”

She also recommends people dropping by Nom Nom Pita on Saturdays for their weekend specials, which she said are also a good option for people who want to try something different.

“Overall, our menu is very accessible, and our staff can answer any questions [someone] may have.

All food served at Nom Nom meets Muslim dietary requirements. The kitchen is pork-free; they serve no alcohol; and the meat they say is freshly and humanely slaughtered as required by their beliefs.

The siblings describe Nom Nom Pita’s atmosphere as “very chill and laid back” and with that said, even though they do not serve alcohol, you can BYOB (bring your own bottle) – so people are free to bring a bottle of their favorite libation to enjoy with their food.

In choosing the space for Nom Nom Pita, the Cargills took into account they do not consume pork or alcohol, and wanted a space in which they could feel confident there would be no chance of food cross contamination. The family homestead provided the perfect avenue for them.

“Nom Nom is a family business,” says Sumayyah. “Our family has occupied our home and the adjacent building for the past 70 years. Over the years, four generations of Cargills have lived here in Centreville, so it was a natural decision to renovate the building constructed by our grandfather to house this undertaking.

“Our brother, Shomekhan Cargill is a farmer, and having witnessed the challenges that Bahamian farmers have, we also wanted to create an outlet that would highlight the value of fresh native fruits, vegetables, eggs and meats.”

Sumayyah says their goal is to also eventually distribute fresh meat, including beef, mutton and chicken sourced from local farms.

“The quality difference is enormous, and we believe that Bahamians will appreciate the better taste.”

The Cargills describe Nom Nom Pita as a “take-away-plus”. “We have outside seating for 20 currently, with capacity for more. We pack everything to go, but do offer plated table service for those that want to dine in.”

Nom Nom Pita also offers affordable catering. And they are looking forward to expanding their operating hours into Nom Nom at night and their introduction of a mocktail menu that will offer a mix of exciting flavors.

Sakinah serves as Nom Nom Pita’s executive chef. She studied culinary art at the University of The Bahamas, and was head chef at Goodfellow Farms. She now heads Captains Table in Lyford Cay. She is also a certified nutritionist which allows them to customize their menu options for people with special dietary needs. Drason Dames is the head chef with over 14 years of experience. The team is rounded out with Shadera Clarke, who brings experience in vegan cuisine to the table.

The Cargills opened Nom Nom Pita in the middle of a pandemic, which they say has been difficult, but at the same token, say they have been luckier than most, having received funding through SBDC (Small Business Development Centre) – financing that they say creates more pressure to succeed. But that is a challenge that they welcome.

“As young people, Nom Nom gives us the opportunity to chart our own path and in doing so, support others. We hope that people will come in and try something new,” said Sumayyah, an industrial engineer by training.

Mogano by Giorgio Locatelli at The Island House 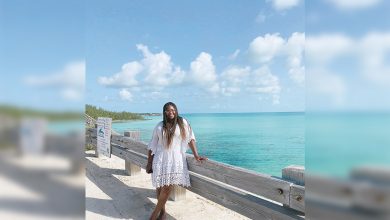