With mounting pressure over his deafening silence many weeks into a power crisis gripping New Providence, Prime Minister Dr. Hubert Minnis has put down the cowbells and has finally acknowledged that we are in a crisis.

Everyone of course already knew that — everyone, that is, except the minister responsible for Bahamas Power and Light (BPL), Desmond Bannister, and its chairman, Dr. Donovan Moxey.

In acknowledging the crisis, Minnis was crafty in his words, being careful not to throw Bannister or Moxey under the proverbial bus.

“To the energy community, this may not fit the definition of a crisis, but for Bahamian families that can’t cook breakfast, fill their gas tanks, buy groceries or even charge a cell phone, this is a crisis,” Minnis said.

We suppose by “energy community”, he means Bannister and Moxey, who insulted our intelligence by insisting the meltdown at BPL was not really a crisis.

But Bannister is not the energy community; he is a minister in Minnis’ Cabinet, who, like the prime minister, has been in la-la land on the BPL issue.

The joke of the day on Monday was Minnis telling reporters that he took more than two months to address the ongoing generation issues at BPL because he was “gathering the facts on the situation”.

“You are a very intelligent girl and you know and I know, you speak when you get the facts,” he told Nassau Guardian Reporter Rachel Knowles, tapping her on the shoulder as he spoke condescendingly.

“You analyze, you accumulate, [and] you get all the necessary data. When you have those facts, and you’re comfortable with the facts, then you would speak out.

“You do not speak prematurely because when you do that, then you have to retract. And you would be the first one all over me.”

Minnis said that as prime minister he needed to speak from a “global phenomenon” and did not want to be premature in his speech.

That it took Minnis well over two months to speak publicly on the issue, providing reassurance to an increasingly irritated and frustrated public and demonstrating leadership in a time of crisis, should worry us all, but, we admit, it is not surprising.

Last week, we pointed to Minnis’ 2015 statement on the “tremendous pain and suffering” inflicted on residents as a result of load shedding by the Bahamas Electricity Corporation (BEC) under the Perry Christie-led government.

Minnis declared, “The BEC fiasco exposes a crisis of leadership. The prime minister has relinquished control of this very important corporation to his deputy, who is out of his depth on this matter.”

Minnis said, “BEC is a mess, a PLP (Progressive Liberal Party) mess. And Bahamian residents and businesses continue to suffer as a result.”

We imagine that the prime minister’s advisors and handlers informed him of the damage he was doing to his reputation as the nation’s leader by remaining silent in the face of this crisis.

On Sunday, we were sent images of the prime minister touring a BPL plant to see first-hand what the challenges are.

He aimed, no doubt, to look like a leader in charge, one with a handle on the situation. But he looked like a leader only now trying to figure out what’s going on — especially since the public was already reminded of Minnis’ 2015 comments declaring the BEC fiasco a crisis of leadership.

The prime minister had been comfortable to remain in the shadows, allowing others to take the heat, as the public demanded answers over the prolonged blackouts.

It was important for BPL officials to speak directly to the public as they did on August 11, but the magnitude of the BPL crisis called for the prime minister to speak much sooner than he did and to demonstrate that the government understood the severity of what was being experienced.

It is not possible to quantify how this prolonged power crisis has impacted the economy, but it has had a tremendous impact. It has also created anxiety among the wider public. Bahamians and others who live in The Bahamas have experienced a diminished quality of life as a result of the crisis.

Many of us suffer multiple daily blackouts; others are anxious wondering when they will be hit next. Our way of life has been significantly disrupted.

Many who visit The Bahamas have suffered as well.

To add further insult, many of us are seeing our energy bills rise, even though we have been off for hours a day. This has still not yet been adequately explained to the public.

We feel used, abused and taken for a long, dark and torturous ride.

The situation is worsened because many of us do not feel that our leaders understand our pain or how to alleviate this unending suffering.

In his contribution to the budget debate in Parliament in June, Minister Bannister skirted the BPL issue, claiming he was running out of time.

When he spoke to reporters in early August, he said what we were experiencing was “not a matter of crisis”, although he pointed out that he too was suffering from the power cuts.

“It’s a matter of us coming to reality and appreciating that we have to make changes, which we are in the process of making,” he said.

We suppose the minister was taking his cue from the BPL chairman, who said, “I wouldn’t use the word crisis. It’s certainly an issue we need to address and address as quickly as possible.”

This summer’s load shedding is worse than any experienced under the previous administration, so if it was a crisis then — as defined by the Free National Movement (FNM) — it is beyond a crisis now.

In times of crisis, leadership is tested. It is important that leaders lead and that they are seen to be leading, not hiding or floating by in la-la land.

Leaders must for sure be working to resolve crises, but how they communicate during these events is also critical.

Minnis is late in the game with his BPL photo op.

He is only now trying to play catch up.

Ministry of Finance keeping an eye on U.S. economy 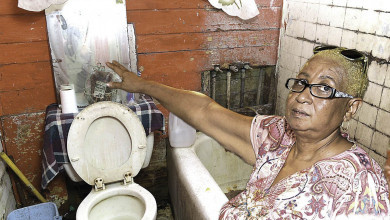