Winter storms in the United States could threaten food supply chains, eventually driving up the costs of local bread basket items, according to the owner of the island’s largest grocery retailer.

Super Value owner Rupert Roberts said yesterday he was closely monitoring the “worrisome” weather conditions – which have claimed lives in Texas and pushed that state’s infrastructure to the brink – adding that he expects a “temporary, small train wreck” that could impact produce availability.

He said while a change in prices wouldn’t be expected immediately, supply chains are under threat.

“It’s worrisome and we’re watching it but I expect more of a break in the food chain than increased prices. But our inventory is still heavy. We still have three months’ inventory, so they’re bought and paid for, so those prices can’t increase,” Roberts told Guardian Business yesterday.

“We only expect a temporary, small train wreck, not a big major supply chain problem the way we had in the pandemic. In the pandemic, we had to buy anything we could buy whenever we could buy it, that’s why I had an issue with price control; they thought I could apply the prices two weeks out. But that’s like the stock market; you buy it the instant you’re offered or somebody else takes it.”

The recently released summary findings by the US Department of Agriculture (USDA) Economic Research Service forecast retail “food at home” to increase by one to two percent in 2021 and “food away from home” prices to increase by two to three percent.

The United States is The Bahamas’ biggest trade partner for food.

“Only the price of fresh fruits declined (0.8 percent), while all other food categories increased in price. Prices for meat, poultry, fish and dairy increased between 4.4 percent (dairy and other meats) and 9.6 percent (beef and veal).”

The Bahamas CPI released earlier this month by the Department of Statistics showed an increase in the “food and non-alcoholic beverages group” from 110.05 last July to 111.17 in December.

Roberts said at this point, it’s too soon to determine how much food prices may increase because of the winter storms across North America. He said in particular, milk products are at risk.

“No, it’s too early. Speaking to say, produce supply, there has been no freeze in California but they have to bring it through the freeze and of course they have to use trailers and it’s hard to bring 35 degree trailers through 20 degree weather; you have a lot of mishaps and freezing. It’s worrisome that the whole north is sort of frozen. That means North America, Canada and so on,” Roberts said.

“I wonder what’s going to happen to the evaporated milk with the cows that side in the north. The south can’t produce enough evaporated milk to supply the world or even regular milk. A lot of this in North America, the United States, happens underground and throughout Canada. The chicken farms and the dairy farms, the cows come out when they can but they sort of live underground when they have to, so production is normal.

“I think this is so temporary, that it may not really affect us. Now, yes, it may if North Florida and Texas loss their fruit and vegetables, we may have an immediate problem there, if California can’t bridge the gap or Mexico can’t bridge the gap. But this is worldwide and it’s very international and we’re monitoring. As one market closes, the other opens. I don’t expect any problem other than probably fresh fruit and vegetables might see some disruption, but that’s up and down every week anyway.” 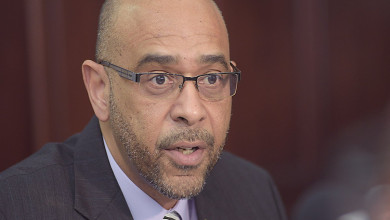 Just over half a million dollars worth of pennies redeemed

Disney to resume sailing to Castaway Cay next month

Moxey: BPL hoping to raise more than $530M on capital markets by year-end