Twin brothers D’Ron and T’Ron Strapp and Kennedi Knowles, all Carleton Williams Scholarship recipients and graduates of Garvin Tynes Primary School, recently returned to the institution they graduated from to remind the students of the importance of education, which the Strapps said is a “passport”, and to remind students of the words of Malcolm X – that tomorrow belongs to those people who prepare. They encouraged the students to make application for the 2020 Carleton Williams Scholarship – a scholarship that has afforded them the opportunity of free private school secondary education.

The Strapps, who attend Aquinas College, are 2016 graduates of Garvin Tynes Primary School and the first recipients of the award. Unlike their primary education which was free, they told the students that the school they now attend has a tuition of approximately $1,500 per term. And if their parents, Herman and Shama Strapp, had to pay it, it meant double the fees.

T’Ron spoke to the fact that both he and his brother are ambitious students and always strive to do and be their best. But he admitted that it took hard work and effort.

“An investment in knowledge pays the best interests because it helps to secure a successful future,” said D’Ron.

“Upon our graduation day, this female by the name of Karla Wells-Lisgaris (brand manager, Caribbean Bottling Company) said let me just drop by this graduation and see what’s up. At this point I didn’t know her and she didn’t know me, but that was soon to change,” said T’Ron, who graduated valedictorian.

After the Strapp brothers were interviewed, Caribbean Bottling Company (CBC) representatives were so impressed that they couldn’t decide between which brother to give the scholarship to, and awarded them both the renewable six-year scholarship.

“For this we are forever thankful and grateful,” said D’Ron, who is the leader of two clubs at Aquinas, as well as class prefect.

T’Ron reminded the Garvin Tynes students that a winner is not always the person who finishes on top. “Everyone has different strengths and weaknesses. Your way of succeeding or perhaps winning is how you choose to use it wisely. If you cannot do great things, do small things in a great way.”

Knowles, a student at St. John’s College and a 2018 scholarship recipient, was also in attendance, and along with the Strapps spoke to the students about her high school experiences to date, and about what winning the scholarship has meant to her. The recipients also shared advice with the graduating sixth grade students who are preparing to start a new chapter on their academic journey.

The Strapp brothers and Knowles also spoke to the realities of high school as they’ve encountered them and answered questions the primary school students had. They encouraged them to apply for the scholarship if they have an interest in attending a private high school.

Garvin Tynes Primary School sixth grade students can apply for the Carleton Williams Scholarship by visiting www.cbcbahamas.com. Applicants must be Bahamian citizens, present a need of financial assistance, have a 3.0 grade point average (GPA) or above, show evidence of involvement in community and extracurricular activities, be able to attend the required candidate interviews and have an acceptance letter from their chosen private school. The application deadline is April 30, 2020.

The six-year award allows the recipient to pursue their studies at the private high school of their choice.

The CBC Carleton Williams Scholarship was created to celebrate the work of Carleton Williams who contributed to the advancement of CBC as well as his community. The academic scholarship rotates annually between New Providence and Grand Bahama and awards one graduating public primary school student seeking to attend a private high school. In addition to Knowles and the Strapp twins, CBC scholars also include 2018 recipient Anajah Culmer who received the award the same year as Knowles; 2017 recipient K. Kaiya Pinder; and 2019 scholarship awardee Gabriel Hall.

The lessons: self-discovery, belief in oneself and courage 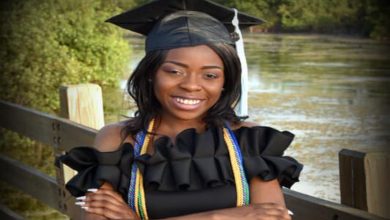 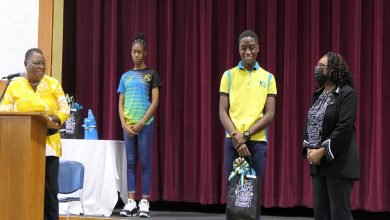