The greatest regret in the political life of Dame Janet Bostwick, the first woman member of Parliament in The Bahamas, is that The Bahamas constitution was not amended to eliminate discriminatory provisions to achieve true gender equality.

To this day, the children born to all Bahamian women, no matter where and no matter the mothers’ marital status, do not have an automatic right to Bahamian citizenship.

We discussed the matter with Dame Janet, coincidentally, on the fifth anniversary of the failed 2016 constitutional referendum brought by the Christie administration.

The issue was topical for another reason: Dame Janet has been named the 2021 recipient of the prestigious CARICOM Triennial Award for Women, which is bestowed every three years.

She joins a short list (13 in all, with Dame Janet’s selection) of distinguished Caribbean women who have received the award. Previous recipients include Dame Nita Barrow (deceased) of Barbados, Madam Justice Desiree Bernard of Guyana, Marion Bethel of The Bahamas, and Shirley Price of Jamaica, the 2017 recipient.

The award is bestowed upon Caribbean women who have made significant contributions to the socioeconomic development of the Caribbean Community and to the advancement of gender equality and women’s empowerment.

The award honors contributions in a wide range of fields of endeavors, including agriculture, economics, law, politics, gender and development, religion, public service and trade unionism.

Dame Janet told us she was both humbled and surprised by the award.

“I know very well a number of women who have been pioneers in the struggle for the eradication of all forms of discrimination and for equality in the region, and women who have also fought before and they continue to fight for the enhancement of the socioeconomic and political advancement of women,” she said.

“That I was chosen was a humbling honor, really.”

We asked Dame Janet about our failure to more successfully advance gender equality.

“It was my greatest regret, and that we still have not been able to do it is painful,” she said, “but I am heartened by the fact that now more than ever the women of The Bahamas, in my view, have been newly ignited. You have the fight now being led by a number of women, not only in the political realm, but across the whole spectrum of society, and I am very pleased to see that.

“Women are again coming together; they have taken off the political cloak and they’re coming together as women to advance the cause of women in The Bahamas. I am very pleased to see that. It will only succeed when we treat it as a national imperative. It cannot be a partisan political struggle; it cannot be because that does not work.”

Dame Janet was a member of the Ingraham administration, which on February 27, 2002 staged the first constitutional referendum, which failed.

That referendum covered a broad range of constitutional issues: Voters were asked whether they approve of an independent election boundaries commission; the creation of an independent parliamentary commissioner; the removal of gender discriminating language from the constitution and if children born to Bahamian mothers and foreign fathers should have Bahamian citizenship; the raising of the retirement age for judges and the creation of a teaching commission.

On each question, the “no” vote was overwhelming.

Dame Janet noted that the Progressive Liberal Party (PLP) supported the referendum bills in Parliament then campaigned aggressively against the referendum in the public, securing a rejection of the crucial vote, which came less than three months before a general election, which the PLP went on to win.

“It has been proven that you cannot trust the word of politicians in Parliament because in Parliament they get up and everyone is committed to the change and then it is made a political football,” Dame Janet said. “The PLP at that time campaigned very hard against it so it was defeated in the referendum.”

The next constitutional referendum did not take place until 2016 and was equally mired in politics with then opposition leader, Dr. Hubert Minnis and the Free National Movement failing to show any enthusiastic public support for the referendum.

Among the questions, voters were asked whether they approved of a constitutional change so that every child born outside The Bahamas would become a citizen at birth if either his or her mother or father is a citizen of The Bahamas by birth.

Additionally, they were asked to approve an amendment to allow an unmarried Bahamian man to pass on his citizenship to his child subject to legal proof that he is the father.

And the most controversial aspect of the 2016 referendum asked voters whether they approved an amendment to make it unconstitutional to discriminate based on sex.

That referendum was soundly rejected.

The Minnis administration came to office promising a referendum on constitutional amendments to provide for the creation of an independent electoral commission and boundaries commission, introduce a term limit for prime minister and introduce a system of recall for non-performing members of Parliament, but it did not promise any referendum on the citizenship issue.

In any event, the promised referendum never happened.

As Dame Janet observed, we are now “referendum shy”.

Last December, PLP Leader Philip Brave Davis said a referendum to address gender equality issues would not be a priority of his administration should his party win the next election.

He made the comment after Attorney General Carl Bethel recommended that the next government have a referendum on the citizenship issue early in the term.

Dame Janet believes that whenever another government decides to hold another referendum, it should be on the citizenship issue alone.

“I think it is essential when we do it again that we go on citizenship only and I think we need to go on citizenship of children born to Bahamians and deal with that issue separate and apart from all of the others no matter how important they are,” she said.

“I don’t know if our people are ready to look at the whole gamut of constitutional changes at one time. It gets mired in many, many other side issues. We don’t need that.”

We put to her that perhaps such a referendum would need to take place early in the term.

But Dame Janet said the beginning of a term might not be practical because an administration would be aware that if the referendum fails, convention would require that it go back to the people in a general election for a new mandate.

In November 2017, Prime Minister Minnis announced in Parliament his administration will amend legislation to allow all Bahamian women the right to automatically transfer citizenship to their children regardless of where they are born.

The news was welcomed in some quarters, but three and a half years after that important declaration from the prime minister, the government has said nothing more on the issue.

In any event, Dame Janet believes that amendments to ordinary legislation are simply not enough.

“There’s that school of thought that it can be done in that way, and I suppose it can be done, but I don’t know if it will not be open to argument, if one would seek to contest it. Our constitution does not permit that,” she said.

“I will not be satisfied, nor should well-thinking people be satisfied unless that portion of the constitution is made extremely clear that a Bahamian is able to pass her citizenship to her child no matter what her particular status, married or unmarried.”

Dame Janet said constitutional change is not something that should be handed down by leaders for voters to act on.

“The cry for this change must come from the people,” she stressed. “It cannot be the government saying this is what they are looking to do. It has to be a mass of people pushing them to do it.”

We could not miss the opportunity to also speak with Dame Janet, a former member of Hubert Ingraham’s cabinets, about the dearth of women in national political leadership in 2021.

There is not today any woman in a substantive role in the Minnis Cabinet.

After Lanisha Rolle resigned in February as minister of youth, sports and culture, Minnis appointed Pakesia Parker-Edgecombe as minister of state for Disaster Preparedness, Management and Reconstruction in the Office of the Prime Minister. It seemed to be an appointment to stave off criticisms about an all-male cabinet.

Women are underrepresented in the Parliament of The Bahamas.

Of this number, however, only 11 were fielded by the two major parties, the mission noted.

“In spite of the growing number of female candidates, the final results mean that women will still be underrepresented in the House of Assembly with five women (12.82 percent) out of 39 members of Parliament,” the mission observed.

“This ranks The Bahamas 10th of the 12 English-speaking CARICOM members of the OAS in terms of the number of women in national parliaments.”

To date, the governing Free National Movement has ratified 35 candidates for the next election – seven women.

Speaking to the issue of female political leadership, or, rather, lack thereof, Dame Janet told us, “It is a very, very painful fact, but that will not change until our women decide they’re going to make that sacrifice, they are going to push themselves.

“I know that in this last election and in elections before, the leadership of the party tried very hard to get women to come forward to offer as candidates but they’re not forthcoming.”

In a March 2020 article, Razan Masad, a regional electoral consultant for the United Nations Development Programme (UNDP), noted that women are putting themselves forward for elections more and more, yet their numbers are still far behind those of men.

“Even though it is widely accepted that development, peace and prosperity in societies cannot be achieved without half of the world’s population, women continue to be sidelined in decision-making,” Masad observed.

“The stigma against women in politics is still alive and well. They continue to face structural, socioeconomic, institutional and cultural barriers.

“Tackling those barriers takes effort on the part of every element of society whether it is government, civil society, the media, academia, the private sector, youth and yes, even men.”

Dame Janet said more women need to be willing to enter the political fray with the status quo in order to try to change it.

“You’re not going to change it so that it becomes more desirable for you to come,” she said.

“You’re going to have to come in and fight for changes and unfortunately, nothing is given to you. You have to fight for it.” 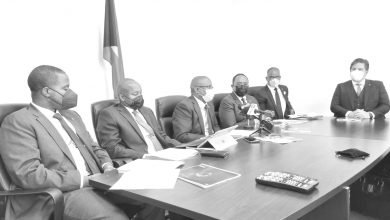