Sunae Russell has had many days she said when it appeared to others as if she was standing alone, but what they could not see was that the Lord was her defender, and fighting on her behalf. That is also the message in her single “He Is Defender”, which tells the story of Jesus always coming to his people’s rescue during difficult times.

“The lyrics of the song was given to me by the Lord during a time when I was going through an intense battle. I lived every word of that song, and I saw God show up on my behalf,” said Russell. “God has never lost a battle.”

She experienced a “life-threatening health scare” in 2018, which had her so iron deficient that she could barely walk, without struggling to breathe. She recalls being taken to the hospital, where medical professionals told her that the blood loss they saw in her, is a loss that they only see in gunshot victims who have bled out.

Russell was severely anemic, and her heart was working hard to try to get blood circulated. Blood wasn’t getting to her feet and her feet started to swell. Her entire medical crisis stemmed from fibroids in her uterus that had grown so large, she said, she looked like she was six months pregnant. It caused her heavy menstrual bleeding every month, to the extent she had to stay home from work for days every month.

When she was admitted into hospital, she said she had to be given two transfusions.

“As human beings, we tend to always remember what a person used to be.”

But she said the people whom God has chosen, and will choose, will blow the minds of many.

“I have had my trials with church folk as well, who can be very judgmental and critical of people – the envy, the jealousy, pulling down folks – it must stop. Judgement begins in the house of God. Many are the afflictions of the righteous, but the Lord will deliver them out of them all. He is defender, and mighty in battle.”

“He Is Defender” is a contemporary gospel song written and sung by Russell, featuring background vocals by Latasha Taylor and Ian Stewart. It was produced by Freddy Seymour.

The video is expected to drop in September and she promises a powerful video that will encourage and inspire.

Russell began singing at age five, and has memories of her first performance at the Hawksbill Primary School in Grand Bahama when she performed in the Christmas program in a white dress and red stockings. She would go on to enter various talent shows and competitions – Miss Talented Teen Bahamas, Miss COB Caribfest, and Onstage at the New Palace.

She sang lead in a number of local bands with the likes of Peter Whitehead, Frankie Victory, Chris Justillien, Fred Ferguson, Shamond Smith and Ericka “Lady E” Symonette; and represented The Bahamas at Carifesta. She also shared the stage with the deceased legend, Ronnie Butler. After she dedicated her life to the Lord, Russell said she crossed over to the gospel genre and became a member of Harmonious Praise gospel group.

Also to her credit are the singles “Praying Mamas of Zion”, “Move for Me”, “Waymaker”, “Make a Decision” – all from the album “Move For Me”, which was nominated for a South Florida Gospel Music Award (former Palm Beach Gospel Music).

When she’s not laying down lyrics in praise of God, Russell said she is also a fun-loving, life-of-the-party, plain-speaking young lady.

She is a music educator and choir director who said she is proud when she sees former students at events at which she is performing, on the program with her, or also on stage.

“I am also proud to see so many former students involved in Junkanoo and other cultural events. It was where I got my early start in the cultural arena.”

As for her musical inspirations, Russell said she has been inspired by Elizabeth Thornton, the late Audrey Dean-Wright and the late Pauline Glasby.

“I was a student in high school when Elizabeth Thornton saw my musical talents and capabilities, put a clarinet in my hand, and a microphone to my mouth. I joined the school band, and was a rising star singer at school. That was when I decided to be a music educator. When I entered the College of The Bahamas (now University of The Bahamas) Mrs. Wright and Mrs. Glasby saw that same ability in me. They got down on me when I wasn’t practicing my piano and clarinet pieces enough, or if I didn’t learn the lyrics of the Italian or German song with the correct pronunciation for my Royal School singing exams. It was due to their mentorship, that I was one of only a few people who passed teaching practice with distinction. I also was inspired in my songwriting skills by Mrs. Wright, who would sometimes use my voice to showcase her original compositions. And let me not forget – I have always been inspired by the vocal prowess of the late great Whitney Houston.

“He Is Defender” is available on all digital platforms and is in rotation on local gospel stations.

Gardiner steps back on the track today 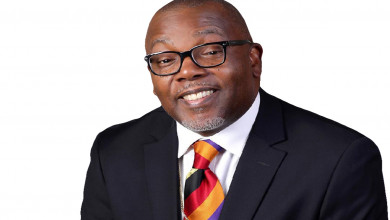 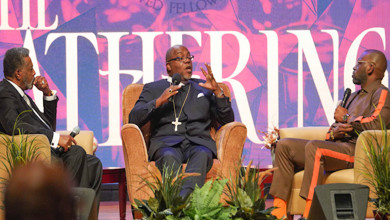 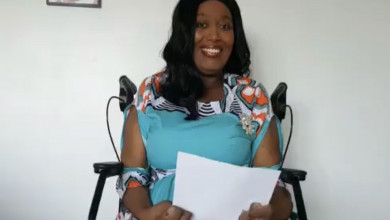