Another young kid from The Bahamas is receiving a major league opportunity and once again, it’s the International Elite (I-Elite) Sports Academy that is facilitating the process.

Evan Sweeting, 19, became the second Bahamian in as many days to sign a professional contract with a Major League Baseball (MLB) club on Wednesday and the first Bahamian pitcher to do so since Chavez

Fernander inked a deal with the Detroit Tigers in 2018.

Sweeting, who came up through the Junior Baseball League of Nassau (JBLN) before catching the eye of Bahamian coaches Geron Sands and Albert Cartwright at I-Elite, said he always had the confidence that this day would come. He left JBLN at age 13 to give I-Elite a chance to further develop him and that is exactly what he did.

The 6’2” 195-pound right-handed pitcher competed in a number of tournaments overseas, but it was at the New Balance Baseball Future Stars Series International Week in Boston, Massachusetts, where he impressed scouts. It was there where International Crosschecker Scout for the San Diego Padres Bill McLaughlin decided that they had to have him in their program.

Sweeting thanked God, his parents, grandparents, coaches and everyone who assisted in him getting to this point of his baseball career, signing on the dotted line with the Padres organization at the Bahamas National Trust on Village Road yesterday. Terms of the deal were not disclosed.

“You have all helped my dream come true. You have helped me become the person I am today and I am grateful to have all of you in my life and to have your support,” said Sweeting. “Also, I want to thank the Padres for believing in a kid like me from The Bahamas. With Coach Geron and Coach Albert, I felt like I was able to progress and make it to the level that I wanted to get to. This feels amazing – there is no feeling like this. I’m just excited and ready to get to work. I’m looking forward to continuing to progress and make it to the big leagues. I’m going to work hard and try to move through the system as fast as I can. I’m looking forward to the journey.”

Sweeting, who doesn’t turn 20 until October, will likely head to the Padres’ training site in La Vega, Dominican Republic, before being assigned to one of two rookie-level teams of the Padres in the Arizona League, which plays their home games at the Peoria Sports Complex in Peoria, Arizona.

Sweeting could leave as early as the first week in February.

“We’re just thrilled to have him with us,” said McLaughlin. “He has a great body, great delivery, throws strikes, has three pitches and good composure – there is nothing not to like about him. He’s also a very hard worker. He’s just a good kid with a strong body and we liked what we saw. We’re looking forward to having him join the system. I’ve been coming here for 5-6 years and this is the first time we signed someone from The Bahamas. It feels great. I think there is a lot of talent here. This is probably the next hot spot to be honest. There are a lot of players who are really talented and there are several prospects. You guys had Jazz Chisholm (Miami Marlins infielder) make it to the big leagues last year and more are on the way. This is definitely one of the places to come and see new talent. Evan is going to be a part of the next wave. He looks good in the brown and gold and we’re happy to have him. I just want to thank everyone who was a part of this. We consider ourselves family now.”

The Padres were once respected for having the top minor league system among major league clubs. Now, they’re in the top five and are continuing to lure some of the finest young ball players in the Caribbean region, and North and Central America. I-Elite Co-Founder and President Geron Sands said it’s all about trusting the process.

“He always had the ability to throw and he just continued to increase in size through growth and working out in the gym. The weight room was big for him,” said Sands. “We just want to thank Kim and Richard for allowing their son to follow his dream and trusting us to take him to the next level. He will be a big leaguer one day. He’s in good hands now, and its up to him to go out there and represent all of us well.”

Sands said it was just a matter of putting Sweeting in the right place at the right time – facilitating his travel to tournaments where he could play in front of major league scouts.

“He just had to be ready for when the time came,” said Sands. “He blossomed at the right time and now it’s all about taking the next step in that journey. When it comes to pitching, Evan is one of the best The Bahamas has produced in a long time. He has three pitches – a fastball, a curveball and a changeup. His changeup is his strikeout pitch. Having three pitches this early and being able to throw them for strikes is huge. That could lead to him being a starter in the big leagues.”

I-Elite currently enrolls 20-30 young baseball players from New Providence, Grand Bahama and Eleuthera. The organization has facilitated professional deals for 20-plus young Bahamian men over the past six years, helping them fulfill their goals of playing professional baseball. Additionally, there has been 15 high school or college scholarships awarded through the program to schools in the United States.

As for Sweeting, his fastball reaches a velocity of

91-93 miles per hour (mph) and his curveball and changeup pitches are deadly.

“It takes a lot of hard work, but with the right infrastructure and the right set up, we could easily go from 20 to 50 guys signing professional contracts,” said Sands. “This is still an untapped market and there is so much talent out there. We believe these kids are the future of The Bahamas and investing in them is the only way to make our country a better place.”

The main goal of I-Elite is to incorporate education with professional baseball training and continue to develop and assist aspiring athletes, helping them reach their goals. Sweeting said through workouts at I-Elite, workouts on the beach, running, and other drills, he was able to get his body in the desired shape to be able to perform consistently well on the field. His mother Kim said they’re all proud of how far Evan has come in his development and are thankful for all the support they’ve received along the way.

“We were drawn to I-Elite because of the work they put in and the results that they’ve had. They know what they’re doing and they really work to get their kids off to the next level. We’re very proud to see how they nurtured and encouraged him,” she said. “Evan had to learn the proper way and their drive (I-Elite) drew Richard and I to pursue this. It has been a long process and we wouldn’t trade it for anything in the world. We’re proud to be on this journey with Evan.”

One of Sweeting’s coaches at I-Elite, former professional baseball player from The Bahamas Albert Cartwright, said they wish Evan the best of luck and offer an abundance of love and support going forward.

Sweeting said he will continue to work hard to progress as a baseball player and will certainly make his family, friends, supporters, I-Elite and the entire Bahamas proud. 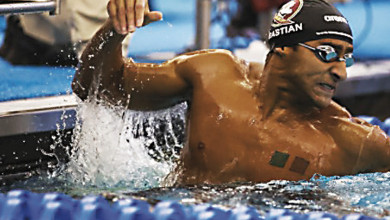