Following general elections that swept the Free National Movement from government just over two months ago, the party elected a new leader, Michael Pintard, at a special one-day party convention on Saturday.

The Party turned to Grand Bahama, which has been popularly called “FNM Country” for more than three decades, to select its new leader. Pintard, the present member of Parliament for Marco City occupies the seat held by party founder Sir Cecil Wallace-Whitfield at the time of his death. The election process proved smooth, and the results were amiably accepted by the losing candidates.

In a short address to delegates following his convincing election, the new leader sounded all the right notes. He paid tribute to all his predecessors in office including his immediate predecessor.

He committed to listening not only to the party’s officers and meritorious councilors but to all its members and to the wider Bahamian community.

He pledged to collaborate constructively with the government to advance the interests of the Bahamian people, but he especially assured his party’s supporters that the FNM would keep the government’s feet to the fire – a particularly important commitment given the huge parliamentary majority enjoyed by the government.

He called on members and supporters who may have strayed from the party at the last general election to return home.

He promised to refresh and reshape the party by introducing new blood even while holding on to core values and not alienating veterans.

A former party chairman and senator before his election to the House of Assembly in 2017, the new leader acknowledged that the last FNM government, in which he served as a Cabinet minister, did not always get everything right. Still, he opined that some of the government’s tough decisions were mandatory given the historic challenges presented first by Hurricane Dorian and then by the COVID-19 pandemic.

He asked for patience from the party’s supporters as he sets about putting a new leadership team in place over the next three months. He promised to make the party ready to assume leadership of the country at the next general election.

During his short term in the House of Assembly and in the Cabinet, Pintard developed a reputation as a well-prepared parliamentarian and a competent minister. Trained as an agronomist and agricultural economist, he has had a varied private sector career including consultancy on broadcast radio, art and theatre management and urban planning.

All the same, the new FNM leader has a tough task ahead rebuilding support for his party following an agonizing and devastating general election defeat. First on his agenda will need to be the restoration of the party’s record of transparency and accountability in government, a record that suffered a beating during the last four years.

The newest COVID-19 variant was detected in South Africa last week. Cases have already been identified in the United Kingdom and in several western European countries.

The high number of its mutations has caused the World Health Organization to declare it “a variant of concern”.

The United Kingdom and the United States of America have reintroduced travel bans for non-nationals arriving from a number of countries in southern Africa, as has The Bahamas; and Britain has reintroduced its mask-wearing mandate on public transport and in shops. Both countries are requiring negative PCR tests for all arriving passengers.

This new variant comes at a time when anti-COVID-19 vaccination rates remain perilously low in The Bahamas. Calls from the prime minister and the Ministry of Health for the population to become vaccinated against the virus ring hollow while Cabinet ministers and members of Parliament remain unvaccinated.

The underrated importance of mental health 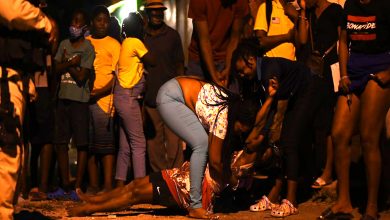 A needed return to the classroom