If there’s one thing Stephanie Knowles knows, it’s that her daughter Ebony’s life is one of purpose – after watching her daughter admitted into hospital upon suffering excruciating migraines, and tests revealing Ebony had suffered a ruptured aneurysm that caused bleeding to her brain, which resulted in speech loss. Knowles watched as her daughter went from non-verbal to verbal … albeit slower, and from not remembering to remembering.

“When we took her to the hospital, Ebony wasn’t able to talk – but in the days that followed, she was able to communicate via writing on a pad with a pen, and after another two days, talking slowly.”

As Knowles put it, “a little better and a little better” as her daughter was taken into surgery on Monday for an endovascular procedure to correct the problem. It’s a procedure performed to block blood flow into an aneurysm. It has been used in patients since 1991.

Ebony, 31, was admitted into hospital on November 6, and transported via air ambulance to the United States on Thursday, December 3.

“From what I’ve been told when we got over here, they said she is going to make it,” said Knowles. “They are saying she is in a bad situation, and considered a good candidate in terms of recovery.”

She believes her daughter’s will and desire have kept her alive.

At the same token, Knowles said she will do everything she can to assure that her daughter comes through this “hurdle in her life” and is able to continue to be the best Ebony that she knows she can be. Case-in-point, Knowles “moved heaven and earth” to come up with the funds to ensure Ebony would be able to have surgery. And she needed a down payment of more than half the $200,000 the family was quoted for surgery.

Ebony’s medical emergency came at a time when she has no health insurance coverage. She had left a job a month before and started new employment where she did not have health coverage at the time of the aneurysm rupturing.

“It took about three weeks to get it [funds] together,” she said. But she said there was nothing else for her to do, but to make it happen.

But the mother has support behind her. Knowles said family and Ebony’s friends have stepped in to assist, including organizing a GoFundMe to crowdfund to assist with the medical bills.

While Ebony was in surgery yesterday, Knowles thanked her daughters’ friends who she said were supportive and stepped up for her daughter. She said they showed that they are not just “talkers, but doers”.

As of Monday, the GoFundMe account showed $22,755 raised, but Knowles said funds have also been donated to her bank account at CIBC FirstCaribbean, account number 200280030 in Stephanie Knowles at the Palmdale Branch.

A brain aneurysm is a bulge in a weak area of a blood vessel in or around the brain. The constant pressure of blood flow pushes the weakened section outward, creating a blister-like bump. When blood rushes into the bulge, the aneurysm stretches even further. If the aneurysm leaks or ruptures, it causes bleeding in the brain.

According to clevelandclinic.org, ruptured brain aneurysms are rare, and occur in approximately 30,000 Americans a year.

A person is likely to develop a brain aneurysm if they are female; they can form in people as young as 30, rarely even earlier, but are more likely after age 40; have a family history of aneurysms; have a rare blood-vessel disorder like arterial dissection; fibromuscular dysplasia or cerebral arteritis; have a genetic disorder that affects connective tissue such as Ehlers-Danlos syndrome, Marfan syndrome, neurofibromatosis type 1 or Loeys-Dietz syndrome; have polycystic kidney disease; or are born with brain aneurysm as a birth defect.

Researchers also haven’t discovered exactly what causes an aneurysm to leak or rupture, which causes the bleeding in or around the brain, according to clevelandclinic.org. But they say anything that increases a person’s blood pressure can be dangerous. And that higher blood pressure makes blood push harder against blood vessel walls.

Knowles said the week Ebony’s aneurysm ruptured, she also had her menstrual cycle, and that she typically is one of those people that has migraines with her cycle, so they thought nothing of the headaches she had complained about.

“We got her [painkillers], but the headaches were persistent,” said Knowles. “Ebony noticed it, but she had a new job and worked from home and was also completing a bachelor’s degree at UB [University of The Bahamas]. She had a lot going on. But within that week, she said her head was hurting extra – even more than before. She said the [painkillers] were working, but the headache would come back.”

Knowles said her daughter also had a desire to regurgitate, and diarrhea, but said they chalked it all up to the migraine.

A brain aneurysm that is leaking or has burst open is life-threatening. It requires emergency medical treatment. People with a ruptured brain aneurysm often say the headache is the worst headache of their lives, according to clevelandclinic.org.

Knowles said her daughter had gone out to a birthday function with friends, where they noticed she wasn’t herself. She indicated that she could not drive, and was driven home.

Knowles said Ebony, when she was able to remember and speak, told them of a feeling that came over her less than an hour after her friends dropped her off, and that her hands and fingers had been moving on their own. And that she could not even call anyone for assistance.

Her stepdad Everette Nixon arrived home and found her.

Knowles said he spoke to Ebony, but she did not respond and was just looking at him, staring. And that he saw Ebony’s hands moving and that they could not stop, which made him realize something was seriously wrong. He called Knowles and told her something wasn’t right with Ebony. He took her to the hospital where they met Knowles.

“We thank God he came home and for his quick thinking,” said Knowles.

Brain aneurysms are treated two ways – surgery and/or endovascular therapy – whether they are ruptured or unruptured, according to clevelandclinic.org.

During open surgical (microvascular) clipping, the surgeon cuts a small opening in the skull to access the aneurysm. Using a tiny microscope and instruments, the surgeon attaches a small metal clip at the base of the aneurysm to pinch it off. This blocks blood from flowing into the aneurysm. The surgery can stop a brain bleed or keep an intact aneurysm from breaking open. Recovery time is different for ruptured (several weeks to months) and unruptured (usually two to four weeks) aneurysms. It’s a procedure considered to be durable with low recurrence rate.

In endovascular therapy (coil embolization, stenting, balloon remodeling, flow diversion, intraluminal web device), the surgeon does not need to create an opening in the skull. Instead, the doctor inserts a catheter in a blood vessel, usually in the groin or wrist, and threads it to the brain. Through the catheter, the doctor places a ball of wires, most often made of platinum, in the aneurysm, sometimes with the help of small stents or balloons. Recently, another small device, called Web, which looks like a mesh ball, made of nickel titanium, also became available, and works in a similar fashion as coils. Both methods result in blood clot formation around and inside the wire ball or web device, and block blood flow into the aneurysm, reducing or eliminating the risk of rupture.

And just like with open surgery, recovery time can be several weeks to months for ruptured aneurysms.

Knowing that her daughter has a “road to traverse” to recovery ahead of her, Knowles said she has her moments, but that she talks to God because she knows she has to be strong for Ebony.

What can you do about sensitive teeth?

‘A bad deal for Bahamians’ 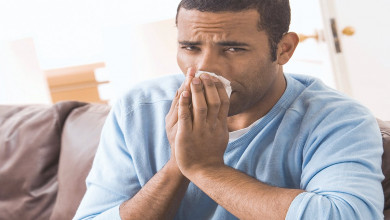