Erica Morris lives her life by the mantra: in order to be powerful, you must empower. So, when she found herself in a “battle” against a formidable foe, known as breast cancer, she decided she had to tackle all obstacles head on. She said that the best way for her to do that was to empower herself.

Even though Morris said she had no idea what to expect of her cancer journey, for her, tackling it meant preparing distractions for herself. She cut her hair (knowing it would fall out eventually, once she commenced treatment) and dyed it pink. She opted to wear shirts with lighthearted comments with cancer references. And it was super easy to spot her because, on any given day, she wore pink tutus, pink wigs, boas … when she took her treatment – anything to help distract her from what she was going through.

As of last week, Morris has completed 16 rounds of chemotherapy – the first four rounds, known as the “Red Devil” because of its strength, she took once every three weeks; the last 12, she did once weekly. She is girding herself to take five weeks of radiation, treatments that are to be done daily. At diagnosis, she made up her mind that she would have a bilateral mastectomy. Morris said she did everything she could to empower herself for the process to fight the insidious disease.

While she may seem fearless, at the same token, she admits that the process has been tough for her.

“It’s hard to stay positive, when you’re constantly… in the words of my ‘grummy’ – having bad feelings,” she said.

“The constant smell of chemicals seeping through your pores… on your sheets… through your clothes. Tasting it in the food you eat, the liquids you drink and the saliva you swallow. Your stomach reminding you that things have changed and it can’t handle [certain things]. Constantly trying to moisturize and massage your body because every inch of your skin is sore, and you can’t find comfort. Even my grandmother’s expensive mattress couldn’t comfort me. And I had to deal with this almost on my own.”

As much as she tries to empower herself, Morris cops to days when she gets tired of being strong and said she outright refuses to wear her “big girl panties”.

“I’m not wiping my tears. I want my mommy, and I allow myself to feel every ounce of emotion. Besides the physical pain, over every inch of my body, cancer fatigue is a different beast – the physical fatigue from the stress of treatments, appointments and attempting to continue on with some normalcy left me drained. There were days when I slept for more than 10 hours and still woke up tired,” she said.

“Cancer wears you out! It takes a toll on your body. You try to find ways to feel normal like taking long showers, hoping it will revive you, and it doesn’t. I’ve heard another cancer patient say it becomes an all-consuming, unwanted companion. During this journey, I have found there are different types of exhaustion when living with cancer – physical, mental, information, and emotional. And there are days when I’m overwhelmed with it all.”

Through treatment, Morris watched her appearance change – her nails were black, she lost her eyebrows and hair. She said chemotherapy has made her body feel like she’s an old woman.

With chemotherapy over, Morris’ hair is beginning to grow back in, and she said her tastebuds are back but are still not at 100 percent.

She recalled each chemo session leaving her with indigestion, heartburn and acid reflux so bad to the point she was laughing at a joke with her friend Christina “Chrissy Love” Thompson, and that laughing made her throw up the entire car ride.

To this day, she hates the smell of alcohol.

“When I smell alcohol, I remember being cleaned to get an infusion. And Sundays are triggers for me because I knew I had to prepare myself to take it on Mondays. When you can feel that chemo going through your body, it’s no joke.”

“Even though cancer took away my hair, and eventually will take away my breasts, changed my appearance and kidnaps my mood occasionally, and has me like a puppet, changed my tastes buds and made me sick beyond measures, it could not take away my will to win, live, love, and be a positive light to those around me.”

Morris made the decision to remove both her breasts to give herself the best chance at life because she’s looking forward to raising her son, Johnathan Robert Thomas, and living to meet her son’s children and at least one of her great-grandchildren.

“I want to see him graduate from elementary [school], high school, college, get married and have children, so whatever I need to do to be here for it all, I am doing it – no matter what comes with it – depression, anger, despair, lowered self-esteem, not ever having a relationship or getting married. For my son, I was willing to risk it all.”

Morris, who is in her late 40s, learned she had breast cancer after her son accidentally grazed her and left her in excruciating pain.

“My son was lying on my lap trying to get comfortable and he grazed my nipple. I thought he had taken my nipple off. I checked inside my bra to make sure it was still there. The pain was excruciating.”

She said she initially brushed it off as tenderness from her menstruation cycle, until she realized she had already had her cycle for the month and the pain was just in one breast. She said it was a pain that lingered for days and, as a result, she knew something was wrong.

Her breast cancer battle is compounded with lupus, with which she was diagnosed approximately seven years ago.

Lupus is an autoimmune disease that occurs when a person’s immune system attacks their own tissues and organs. Inflammation caused by lupus can affect many different body systems, including a person’s joints, skin, kidneys, blood cells, brain, heart, and lungs.

Morris’ lupus is under control but the medication she takes for it, an immunosuppressant, poses a threat to her healing process from cancer and can increase her chance of infection.

As the new year rolled in, Morris admits to having a major bout of depression. She said it takes a lot for her to even get up in the morning. To compound all her problems, she has contracted COVID.

“My mind is clouded. Right now, I have no motivation to do anything. I have emotional and mental fatigue. At one point, I was like is it normal and I had to reach out to a friend and she said it was very normal.”

The one bright spot – her son was able to be with her over the Christmas holiday. And she said she can’t wait to return home because her support system is here.

“I am dealing with this by myself. I don’t have support here [in the United States] because my mom is taking care of my ailing grandmother, and here it’s just me and two aging uncles who are both over age 70, and Chrissy, who has her work and helps me out when she can. I have a cousin who is in kidney failure and has dialysis three times a week, and then I feel guilty complaining because I know when I can end, and she doesn’t, and she is there for me.”

As she continues to do what she can to beat cancer, Morris said she can’t wait to return home and that The Bahamas has always been her happy place.

Treating gum disease: a pathway to saving teeth and your life

Munroe should not comment on police killing, FNM says 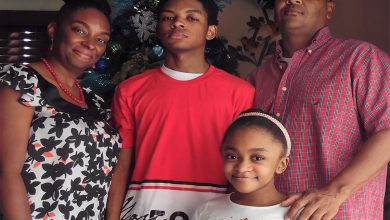