We needed a new version of “West Side Story” like one needs to be stabbed in the chest with a knife during a “rumble” with rival gang members.

Or so I was saying when I first heard someone was considering remaking the legendary film.

The 1961 classic – based on the groundbreaking 1957 Broadway musical, which is a modern take on Shakespeare’s “Romeo and Juliet” – was a sensation when released, becoming the highest-grossing film of that year, and winning 10 of the 11 Oscars for which it was nominated, including Best Picture, Best Supporting Actor and Actress, and Best Director.

When I first saw it as a teenager – almost 30 years after it was released – it was clear “West Side Story” wasn’t like most of its often-goofy contemporary musicals. Its choreography was more modern dance than the tap-dancing or waltz-heavy moves seen elsewhere. The songs were hipper, infused with jazz and more ethnic-sounding numbers. And its youthful characters didn’t act and sound the way most people in musicals behaved.

Its immediate influence on Broadway and Hollywood became clear, as we’d see in the years to come, in many more youth-oriented productions like “Grease” and now even “Hamilton”– productions that could actually attract people who may not ordinarily be interested in musicals.

I’d seen the 1961 film a few times but quite a number of years had passed between the last time and when I saw it again earlier this year. This time, something felt different.

What had been cool and trendy seemed stuck in a bad time warp, like a parody almost. It sounded like what an older person thinks young people sound like. And for the first time, I began to agree that perhaps “West Side Story” is showing its full 60-years and needs an update. Hearing that Steven Spielberg was set to direct the new version made the idea more palatable.

But as luck would have it, on the night it opened in wide-release last week, TCM played the 1961 version again, which I watched, again. And despite the many wrinkles here and there, the original film is still a very remarkable, must-see time capsule.

So, once again, the question arises: does the world really need a remake of “West Side Story”?

It’s the same basic storyline. It’s still the Puerto Rican “Jets” versus the rival white “Sharks”. And love at first sight strikes when young, white Tony spots Puerto Rican Maria at a high school dance in 1957 New York City (NYC). Their burgeoning romance helps to fuel the fire between the warring Jets and Sharks, each vying for control of the streets.

There are some notable and decent improvements. The 1961 picture was largely a filmed version of the Broadway play, featuring some very elaborate interior sets designed to look like basketball courts and alleys and wherever the action was taking place. Many of these were dark and moody.

Spielberg, on the other hand, uses outside locales, designed to look like 1950s NYC. When it’s daytime, things are bright and vibrant, bringing a real authenticity to the story.

The order of the songs has been rejiggered, and some of them are performed by different characters. It’s more in line with the Broadway version, and actually makes more sense.

The dialogue has vastly improved. I don’t know if young people spoke the way we’re led to believe they did, based on the 1961 flick, but the incessant “Daddy-O” and “Dig It” stuff has been toned down quite a bit. The language has been beefed up, too, and is much more intense and “real” and perhaps uncomfortable.

The pacing is more believable as well. The speed at which Tony and Maria “fall in love” is mind-blowing in the original but a little more rational here.

The biggest change is with the cast, especially the casting. Great attention is paid to the ethnicity of the actors. And unlike with most of the actors in the original, all of these performers are indeed singing – no overdubbing here. Ansel Elgort (“The Fault in Our Stars”) as Tony and newcomer Rachel Zegler as Maria are top-notch and shine along with the rest of the cast.

A great treat is the addition of Oscar-winner Rita Moreno, who won the Academy Award for portraying Anita in the original. Here, she plays a new character, Tony’s boss at the pharmacy, and the wife of the “Doc” character in the 1961 version. Moreno is excellent, as always, almost stealing the picture. Can you imagine if this EGOT (Emmy, Grammy, Oscar and Tony) winner earns another Oscar nomination playing a different character in a remake of the film that won her the award?

There’s a lot to like in this new version. It is indeed a good picture. At the same time, though, it makes me a little sad. Why is there this constant desire to redo everything? The changes made here aren’t significant enough to warrant its existence. It’s just a really nice update.

It’s like a classic VW Beetle from the mid-1960s versus one of the reimagined New Beetles of the late 1990s and early this century. The new ones had all the latest technology and features, and truly emphasized how weak and underpowered and rudimentary the old cars were. But we all know which one is the collector’s item, and which one will turn heads on the street today.

Or it’s like your version of your grandmother’s famous pie or cake. You make sure to include the expensive, organic fruits and gluten-free ingredients, of course. But can it really match the wholesome, homemade goodness that granny created with whatever she could find at the time?

There’s something special about the new “West Side Story”, but it’s lacking some of the magic we find in the 1961 version. I am grateful for both. But I’m going to need my remakes – if they must happen – to blow my mind with creativity and new concepts that improve on what came before. 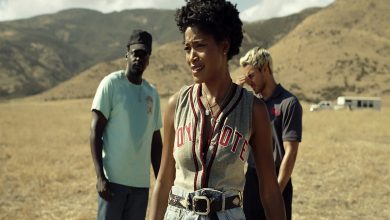