Voter turnout rates in The Bahamas are among the highest in the region.

Bahamians are passionate about their politics, a passion that has led to both monumental highs and some ignominious lows throughout the nation’s history.

It is a credit to the vibrancy of the country’s democracy that an average of approximately 90 percent of eligible registered voters have turned out to cast their ballot on Election Day since 1968.

The process of getting eligible voters to register has played an integral role in encouraging voter participation since the advent of a five-year register in The Bahamas.

That process signals the start of the election season, triggers anticipation that the contest between political parties is set to switch into high gear, and sparks a sense of urgency in the electorate to get out and get ready to cast their ballot for the party or individual of their choice.

Now that the country has transitioned to the establishment of a permanent voters register, it will be noteworthy to see how or if a registration drive geared primarily at attracting new voters will impact voter turnout whenever the upcoming election is called.

Until such time, there are interesting trends to consider in voter turnout rates in The Bahamas that offer some insight into the voting habits of Bahamians, and give clues into some of the prevailing factors that could lead to registered voters choosing either to vote, or to stay home on Election Day.

Those elections were won by the Free National Movement (FNM) under the leadership of former Prime Minister Hubert Ingraham.

Since 1972, successive election years have seen increases in the number of registered voters who ultimately did not cast their ballot on Election Day.

The exception to this trend once again occurred in the years 1992, 1997 and 2007, where more registered voters cast their ballot in those years than in the previous election cycle.

The only other time wherein the increase between cycles was larger was between the 1997 and 2002 general elections, where there was an increase of 5,349 registered voters who did not cast a ballot on Election Day.

For those who subscribe to the view that “my one vote don’t matter”, statistics do not support that position.

Take for example the contest in the Centreville constituency in 2017, that saw the shocking defeat of former Progressive Liberal Party (PLP) leader and prime minister Perry Christie, wherein 727 registered voters — many of whom were PLP supporters — did not cast a ballot.

Christie ultimately lost the seat he held for decades by just four votes.

There are some reasonable inferences that can be drawn from these statistics and the trends produced.

Balancing for factors such as death between the time of registration and polling day, the record high voter turnout rates of the 1992, 1997 and 2007 elections suggest that more voters may have had a higher degree of confidence in the options presented to them during those years.

The country’s highest voter turnout rate of 93.17 percent occurred in 1997, a very popular election cycle for the governing FNM which boasted of marked economic and social turnarounds in its previous term, and the last time the Bahamian people gave an administration a second consecutive term.

The second highest turnout rate of 92.11 occurred in 2007, an election which featured the return of Ingraham to the leadership of the FNM.

The FNM’s former leader attributed the party’s win that year to the youth vote.

The 2002 election cycle, which featured the highest falloff in the number of registered voters casting their ballot, was an election year marked by leadership turmoil for the FNM, and was also colored by a contentious constitutional referendum process overtaken by the politics of the day.

These two factors likely played a role in so many registered voters choosing not to cast their ballot that year.

In the 2017 election cycle — wherein over 21,000 registered voters did not vote — the Bahamian people were once again faced with leadership options by the major parties that did not engender widespread confidence in the electorate.

And in the lead up to the upcoming general election, similar concerns exist with much of the electorate hotly dissatisfied with the administration led by Prime Minister Dr. Hubert Minnis, while others indicate wariness in returning the government to the PLP.

It remains to be seen whether a decrease in the voter turnout rate will become a trend after the next general election, and whether third parties and independent candidate groupings will be able to get out the vote.

In a non-scientific Facebook poll conducted by Perspective, questioning respondents on whether they plan to vote in the upcoming general election, 28 percent said they do not plan to vote.

In our February 2020 article “Hear Us”, where we spoke to University of The Bahamas students on their views about the country’s political prospects, 100 percent of the students under the age of 30 said they had no confidence in either of the major parties, and did not intend to vote unless an option more appealing to them emerged.

Apathy among young voters is not unique to this election cycle, or to voter habits in the Caribbean.

University of the West Indies researcher Dr. Robert Buddan in a lecture on voting behavior in the Caribbean, said of young voters, “the youth vote is volatile and very sensitive to economic pressures. Young voters are less educated and skilled and do not have established careers and so are more insecure.

“They are most sensitive to unemployment and the lack of opportunities for education and training. It is they who would be most supportive of policies providing jobs, training and education but also easily alienated by the absence of these.”

Young Bahamians endured record unemployment even before the twin crises of Hurricane Dorian and COVID-19, as have female workers compared to their male counterparts in the workforce.

UB students we spoke to cited concerns, including employment opportunities; the ability to advance in professions dominated by older employees unwilling to cede the reins to younger talent; a lack of attractive young candidates; the culture of access based on who rather than what one knows; and the absence of a message young aspiring Bahamians can buy into.

They also bemoaned differences between today’s FNM and the PLP they described as imperceptible.

The 18-25 voting bloc made up the highest segment of registered voters in 2017, but there is no published data on voter turnout based on age group that year.

Anywhere one goes, there is a fair likelihood of encountering an FNM supporter who says he or she does not plan to vote in the upcoming general election, or will vote for an option other than his or her party.

Honest FNMs throughout the country will admit to hearing this sentiment expressed, even by die-hard party supporters who they never thought would make such a declaration.

And FNM MPs we spoke to who have no expectation of attribution, admit to experiencing considerable pushback from otherwise supportive constituents who say they are unwilling to vote for the governing party due to its leadership.

It is the kind of sentiment popular PLP MPs heard leading into the 2017 general election and it is an important factor for the FNM to consider because the PLP’s base is fired up and determined to vote so as to pull themselves out of the position of opposition they unhappily occupy.

The more voters who either stay home or give their vote to a third party or independent candidate, the higher the likelihood of defeat for the FNM, particularly since there is little evidence to date to suggest that the FNM is having success in wooing swing voters or those who would ordinarily vote PLP.

Govt wipeout in
Turks and Caicos

General elections in our nearest regional neighbor of the Turks and Caicos Islands last week saw a wipeout of the governing People’s Democratic Movement (PDM) led by former Premiere Sharlene Cartwright-Robinson, who also lost her seat.

Losing to the Progressive National Party (PNP) led by Charles Misick, the only PDM incumbent to hold onto his seat, was the country’s former Health Minister Edwin Astwood, who won in the historical PDM stronghold of Grand Turk South.

Turks Island native and resident Niccola Rolle, whose name has been changed, explained to us that issues that led to the PDM’s crushing defeat included upset over who was deemed eligible to receive COVID-19 stimulus checks, and consternation over how COVID-19 restrictions appeared to favor big business over mom and pop enterprises.

A PDM voter herself, Rolle nonetheless acknowledged, “the men in the party were also afraid to stand up to Sharlene because they were afraid she would fire or demote them, because she would do that when they did something that displeased her.

“It isn’t that the people voted so much for the Progressive National Party (PNP); it’s just that the people were tired of the PDM and they wanted a change, and they beat everybody with the stick of Sharlene Cartwright-Robinson.”

The similarities between events in our sister nation and The Bahamas are worth noting.

All signs point to the calling of an early election.

Once Parliament is dissolved, you no longer have the opportunity to be added to the now-permanent election register, and only the prime minister knows when Parliament will be dissolved.

The Parliamentary Registration Department, meantime, must ensure that it provides all necessary avenues for still-displaced storm victims of Abaco and Grand Bahama, to transfer their addresses, particularly since some are living in tents, modulars or vehicles, or are otherwise between locations in want of permanent housing.

Bahamians are typically emotional voters, but must nonetheless take the initiative to become informed about issues pertinent to the upcoming general election, because an informed electorate is less prone to be distracted by electioneering intended to take focus away from what matters most for the nation.

If the major parties do not inspire you, register to vote for an alternative candidate of your choosing, as these candidates cannot have the opportunity to be elected unless Bahamians vote for them.

Ultimately, making a difference is not just about who is chosen to govern, but about the productive civic involvement of all Bahamians that extends beyond marking an X every five years.

Whether you know who you want to vote for or you are still undecided, get registered.

And when the time comes, vote.

Battle of the ads 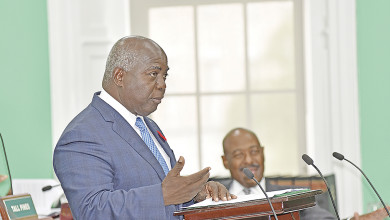